The Worshipful Company of Actuaries autumn livery dinner was held at Londons Grocers Hall on 19 October 2017. 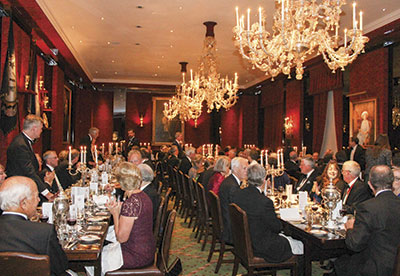 The Worshipful Company of Actuaries' autumn livery dinner was held at London's Grocers' Hall on 19 October 2017. The many camel-themed pictures that adorned the building seemed slightly incongruous at first until you realised that they referred to the original role of grocers in the 15th century as spice merchants, with the camel being a key element of that trade.

Master Nick Dumbreck was delighted to welcome seven new freemen and two new liverymen to the assembled company. He was also pleased to award the Phiatus Award to Nick Silver for his contribution to charitable activities. Nick Silver has for many years been interested in environmental issues, leading initiatives in this area for the actuarial profession and helping establish the Climate Bonds Initiative.

The musical theme of recent events was upheld with a pre-dinner recital of operatic and popular songs by Harry Thatcher, accompanied on the piano by Cat Beveridge. A delicious dinner and wines were then enjoyed by all. Liveryman Derek Newton welcomed the official guests, with principal guest Wasfi Kani maintaining the musical theme. Kani established Pimlico Opera in 1987. This charity works with younger people, using music and drama to aid personal development, and since 1991 has been working in prisons, producing 22 jail-based productions to great success. In 1998, she founded Grange Park Opera, and in her speech described the trials, tribulations and successes of the company's relocation to the historic West Horsley Place, Surrey.

Master Dumbreck described the work of the WCA's Education Committee and finished by outlining his official activities - a highlight being abseiling down London's 'Cheesegrater' building as part of the Lord Mayor's Appeal - "which was actually more enjoyable than I was expecting".