UK women typically have half the retirement savings of men by the time they reach 50, with the gender pension gap found to dramatically widen with age. 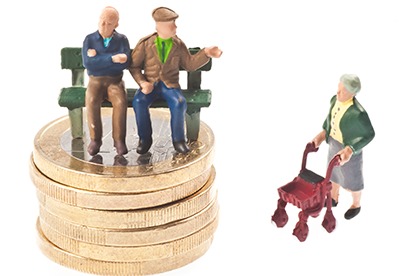 New research by life insurance company Aegon reveals that a 50-year-old man is likely to have approximately £112,000 of pension savings on average, compared to £56,000 for a women of the same age.

This comes amid a national discussion around the gender pay gap in Britain after a significant disparity in salaries between male and female staff was revealed at the BBC last year.

"It's shocking that 100 years after women secured the vote, we have a gender pay gap across every occupation," Aegon head of pensions, Kate Smith, said.

"The fact that the pay gap filters down to mean women receive lower pension incomes is a double blow."

This means that women need to contribute an extra £21 of savings a month to close the gap on men at the age of 30, rising to an extra £360 by age 50, according to the analysis.

Aegon said disrupted working patterns throughout many women's lives make this all the more difficult to achieve, with 49% of women saying they are not confident of having a comfortable retirement.

This is significantly more than the 33% of men that feel the same way, while the research also shows that 28% of women in the UK do not know how much they have currently saved, compared with just 9% of their male counterparts.

In addition, it was found that 42% of women have never thought about how much they will need in retirement, with Aegon stressing the importance of planning early.

"When you factor in that women's ability to save is further interrupted by breaks in their career to raise a family or care for elderly parents, the pension gap reaches epic proportions, making it difficult to catch up," Smith continued.

"The earlier women are able to address the shortfall, the better.

"Women in the early part of their career are within touching distance of men's overall savings - by the time pensions freedoms are an option, the pension pots of men are out of sight."