The ACA Charity Golf Day once again took place in late summer at West Hill Golf Club in Surrey, one of the countrys Top 100 courses. 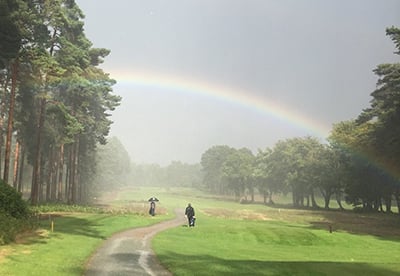 The ACA Charity Golf Day once again took place in late summer at West Hill Golf Club in Surrey, one of the country's 'Top 100' courses. The weather was kind for most of the day, albeit with the occasional downpour.

Aside from the keen golfing competition, the event raised over £1,250 for Get Kids Going! - a charity devoted to giving disabled children and young people up to the age of 26 years - the opportunity of participating in sport, providing them with specially built sports wheelchairs to take part in athletics, tennis, skiing, rugby, sailing, fencing, shooting, archery, powerlifting and many more sports. The ACA Golf Day has over the years raised over £15,000 for the charity.

The morning Stableford competition focused on both an individual and team challenge, with ACA chairman Bob Scott (LCP) topping the individual leader board and winning the Felton Cup and £250 first prize with 37 points. Runner-up was Robert Hawkes (Barnett Waddingham), with Alex Whitley (LCP) third on 35 points.

In the team competition for the ACA Cup, a three-ball from Barnet Waddingham, made up of Robert Hawkes, Dan Collins and Matt Tickle, came out on top, closely followed by an LCP team made up of Bob Scott, Richard Soldan and Andy Thompson.

The 10-hole afternoon Texas - where teams are drawn out of the hat - saw Stuart Southall (Punter Southall), Richard Soldan (LCP) and Sam Roberts (Cartwright) triumph. The longest drive and nearest the pin prizes were captured in both the morning and afternoon rounds by, respectively, Josh Clare (KPMG) and Dave Carstairs (Cartwright).

Next year's golf day will be held on 10 September at West Hill. The event is open to actuaries in membership of the ACA and beyond. If you are interested in playing, contact [email protected]