Pension professionals believe geopolitical risk is the biggest short to medium-term risk facing the global economy, according to the findings of a new survey. 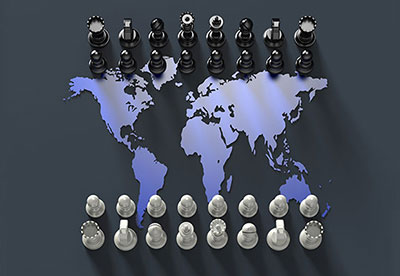 Some 55% of the respondents named this as the top risk, ahead of inflation, growth rates, and central bank policy, which were ranked the biggest threat by 20%, 16%, and 7% respectively.

Asset management professionals also ranked geopolitical risk as the number one threat, with investors thought to be particularly nervous about the political situations in Korea and Iran.

"This surprised me, as I believe geopolitical risk is currently quite low by recent standards," said Steve Cook, managing director at PineBridge Investments, which carried out the research.

"In my opinion, the biggest risk to the global economy is central bank policy given that the huge stimulus measures that followed the financial crisis are gradually being wound down."

The survey was conducted at the Pensions and Lifetime Savings Association Conference in October this year, finding that managing volatility is considered the greatest challenge facing investors.

Improving returns was described as the second biggest portfolio management challenge, and is expected to be an increasingly important goal in a low-return environment over the coming years.

It was also found that a quarter of pension professionals divide their assets fairly equally between active and passive management, with Cook saying he expects the latter style to become less popular over time.

"The passive trend cannot continue indefinitely, as without active managers there will be no alternatives to passive investing and no competition. It would be nothing more than a money collecting vehicle," he added.

It was also found that roughly half of all the pension and asset management professionals surveyed believe that automation will decrease the use of advisors, although the latter are slightly more confident that it won't.

"There will be many attracted to the ease of use offered by automated investment services, but there will always be those who value the expertise of the human investment professional," PineBridge Investments managing director, Hani Redha concluded.