On 13 June, TANC (The Actuarial Network at Cass) hosted an evening seminar. 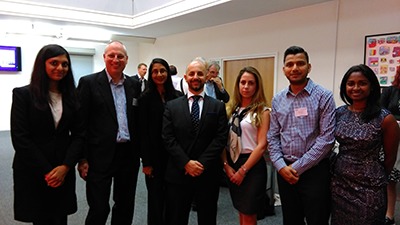 On 13 June, TANC (The Actuarial Network at Cass) hosted an evening seminar where Dr. Paolo Aversa revealed timely lessons that are applicable across different industries and competitive settings. Paolo is a lecturer in strategy at Cass Business School and a leading academic expert in the motorsport industry.

Paolo, equipped with his wealth of knowledge and experience from the world of Formula One, distilled important lessons to an audience of 100 actuaries from various disciplines in four short stories that were very insightful:

1.       Build your future by narrating your past. Storytelling creates the opportunity to bring your customer into your world and experience your business, even before experiencing your product. The professor enforced this lesson by depicting Francesco Baracca, Italy's top fighter ace of World War I who was credited with 34 aerial victories. The emblem he wore side by side on his plane was a black horse prancing on its two rear feet - this later became the symbol of Ferrari (claimed to be one of the world's most powerful brands).

2.       Sometimes less is more. Particularly in times of crisis or turbulence, it is important to reduce complexity. The analogy here was when the motorsport's governing body, the FIA, introduced a new set of rules on the design of the F1 season in 2009. Teams had the option of using a 'Kinetic Energy Recovery system' (Kers) which was introduced with the aim of increasing overtaking, cutting costs and making the driver's role more important than ever. This turned out to be disruptive and the teams without Kers were actually the ones that ended up doing well in the championship.

Simple, reliable, no-frills products and services can help ride out the storm. It is advisable to engage with more complex tasks when the environment is easier to interpret and the market is more receptive of highly innovative products.

3.       Timing matters, execution too, and it does not all depend on you. Some ideas might be the right one, but execution often depends on your partners (e.g. customers, suppliers, stakeholders). So it is important to make sure they are on board. The story shared here by the professor was that of Derek Gardner introducing the concept of a six-wheel car, with four smaller front wheels and two standard rear wheels for the Tyrrell F1 team in 1976. The new vehicle showed terrific potential but in the following year, the official tyre supplier Goodyear didn't commit to the continuous development of the bespoke small size front tyres. This undermined the car's balance making it incredibly difficult to drive.

4.       Strategy needs the right culture to succeed. The professor explained this through the events at the last race of the 2010 F1 season at the Abu Dhabi Grand Prix where Ferrari made an erroneous strategic decision to pit early, resulting in the loss of the world title. The Head of Strategy at Ferrari felt under pressure to choose one of two options, whereas a third option (ie do nothing) would have suited the team best. Ideally, a lead strategist should be able to operate in conditions where they can take responsibility for ambitious decisions, follow intuition, and adjust decisions depending on the changing environment. A "blame culture" kills strategy.

Paolo concluded his talk with a quote from Mario Andretti, "If things seem under control, you're not just going fast enough." In TANC's next event on 14 September 2017, Richard Purcell from Hymans Robertson (and editor of The Actuary) will be presenting 'Disrupting the insurance market: What part can behavioural science and technology play?' For details, visit www.tanc-cass.co.uk.

This article appeared in our August 2017 issue of The Actuary.
Click here to view this issue
Filed in
08
Also filed in
People & Social News