A banquet fit for Cleopatral

Some 252 Liverymen, Freemen and guests joined the Worshipful Company of Actuaries first lady Master, Sally Bridgeland, in the splendour of the Mansion Houses Egyptian Hall for a banquet on 24 April. 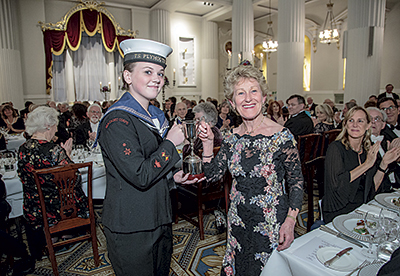 Some 252 Liverymen, Freemen and guests joined the Worshipful Company of Actuaries' first lady Master, Sally Bridgeland, in the splendour of the Mansion House's Egyptian Hall for a banquet on 24 April. The Edmonton Sea Cadets, whose unit is supported by the Company, provided a 'carpet guard'. Prior to dinner over a welcoming glass the guests were entertained by the guitarist Will McNicol.

A fanfare of trumpets welcomed the Master and principal guests into the hall. Four harpists from the Guildhall School of Music provided a musical background before dinner, although the animated conversation of the diners nearly drowned them out. Past Master Thomas's widow, Jo Emms, presented ordinary cadet Michelle Herald with the Robert Thomas Cadet of the Year award. The Master then presented a cheque to Lt. Mark Jones, the commanding officer of the Sea Cadets, inducted Miss Jane Arkle as a companion to the Company and wished liveryman Stewart Lyon a happy 91st birthday; 91 being a special number for the Company as it is 91st in precedence.

After an excellent dinner, the Master proposed the loyal toast followed by an all-too-brief stunning performance by the harpists. The Master, moved to tears by the music, welcomed the guests to the dinner and proposed a toast to the Lord Mayor and City of London Corporation. She praised the Royal Institution's maths master classes and then presented cheques to the Lord Mayor for his Appeal Fund and Mansion House Scholarships.

The Lord Mayor, Alderman Andrew Parmley, then thanked the Master for her enthusiasm and welcomed everyone to his 250-year-old tied cottage. He apologised for the absence of his sheriffs. They were doing their duty at a dinner for the 27 EU ambassadors, which he hoped would help the UK in its Brexit negotiations.

Liveryman Jane Curtis then welcomed the guests and Sir John Eliot Gardiner responded. His themes were flexibility and resilience. He spoke about how uncertainty in politics put stress on both arts and science, which he described as the fertile frontier of resistance. He illustrated this by with the examples of Goya and Beethoven, both of whom suffered with deafness and died in 1827. Both were revolutionaries in their respective arts but also through their art politically. Sir John closed his speech with the toast to the Company. The master responded and the evening came to a close.

This article appeared in our August 2017 issue of The Actuary.
Click here to view this issue
Filed in
08
Also filed in
People & Social News