Younger generation saving more than any other

UK adults aged 18-24 save 10% of their annual pre-tax income on average  more than any other generation, according to new research by Aldermore Bank. 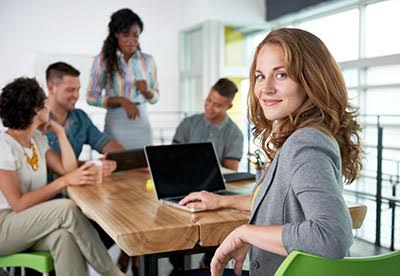 That is compared with the 8% of income typically saved by the adult population as a whole, with the research showing three-quarters of younger people are currently saving, in contrast with 69% nationally.

In addition, it shows that the lowest paid are putting aside the largest proportion of their income, with those earning up to £10,000 saving an average of 15%.

"Although almost a third of the population currently do not save anything at all, our analysis shows that for the majority, the savings message is resonating," Aldermore savings managing director, Simon Healy, said.

"It is encouraging to see that people on low incomes and the younger generation are actually some of the best at saving, the earlier people start savings the better chance they have of reaching their savings goals in later life."

The research involved 4,005 interviews with UK adults in May, finding that those in London save an average of £2,990 annually - the most regionally - compared with £1,338 in the North East, who put aside the least.

The UK's regional saving differences are shown below: 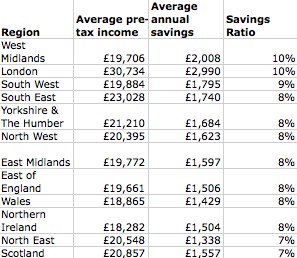 Despite younger people saving a higher proportion than others, the research shows that they are still only saving an average of £1,160 each year, compared with £1,832 nationally.

This comes after figures published by the Office for National Statistics last month showed that inflationary pressures resulted in real wages falling 0.6% between February and April this year.

"It's clear that this can be hard with many people feeling that they are not saving enough particularly at a time when wages are not increasing in line with the cost of living," Healy continued.

"We hope that we can encourage people to make even a small change in their saving and spending habits, which can go some way to provide protection for the future."


Sign up to our free newsletter here and receive a weekly roundup of news concerning the actuarial profession
This article appeared in our July 2017 issue of The Actuary.
Click here to view this issue
Filed in:
07