Consumer price inflation in the UK fell unexpectedly from 2.9% in May to 2.6% in June, according to figures released today by the Office for National Statistics (ONS).

Consumer price inflation in the UK fell unexpectedly from 2.9% in May to 2.6% in June, according to figures released today by the Office for National Statistics (ONS).

This is the first time that the rate has fallen since October last year, with a 1.1% decrease in the price of motor fuels thought to be the biggest reason.

However, core inflation, which strips out the more volatile components such as fuel and food, also fell from 2.6% to 2.4%, suggesting the Bank of England (BoE) may now be less inclined to raise interest rates.

"This downward surprise in June's inflation print removes some of the hawkish urgency within the BoE, with petrol prices and recreational items being the primary contributors," Investec Wealth & Investment bond strategist, Shilen Shah, said.

"The inflationary impact of Sterling's fall following the Brexit vote seems to have lessened, hinting that the domestic economic slowdown may finally be creating some downward pressure on inflation."

The UK's consumer price inflation since June 2008 is shown below: 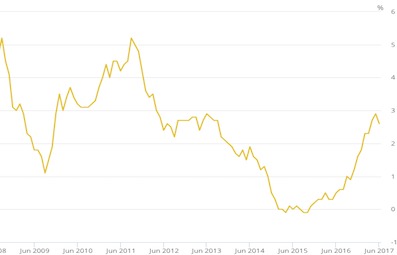 Today's figures come after PricewaterhouseCoopers (PwC) released a series of key economic projections forecasting average inflation of 2.8% for this year, and 2.9% for 2018.

This is expected to result in consumer spending falling from 1.9% in 2017 to 1.5% in 2018, which along with a drag on business investment, is predicted to slow GDP growth.

"We expect the UK to suffer a moderate slowdown, not a recession, but businesses should be monitoring this and making contingency plans," PwC chief economist, John Hawksworth, said.

"There are still downside risks relating to Brexit, but there are also upside possibilities if negotiations go smoothly and the recent Eurozone economic recovery continues."