The Democratic Unionist party has today reached a confidence and supply agreement with the Conservative party to support Theresa Mays minority government. 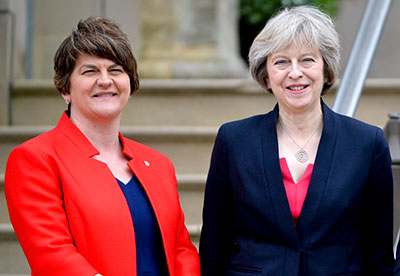 This means "there will be no change to the Pensions Triple Lock" as stated in a document outlining the terms of the agreement, while the universal nature of the Winter Fuel Payment will also remain.

The PM had planned to move to a double lock system, linking pension increases with inflation or wage rises, rather than the minimum of 2.5% used in the current system, but has sacrificed this in forming a workable majority.

"News that the state pension triple lock will remain until 2022 will be welcomed by those who feared replacing it with a double-lock without the 2.5% underpin," Aegon pensions director, Steven Cameron, said.

"But in practice, if as many expect inflation remains above 2.5% in the coming years, it will actually may make no difference whatsoever. The bigger question is for how long future governments can keep it in place.

"With increased focus on intergenerational fairness, constantly prioritising retirees over those of working age could become increasingly politically difficult."

As part of the agreement, £1bn of financial support will be given to Northern Ireland after the government said it recognised the country's " unique history" in a separate document published today.

The Northern Ireland Executive will spend:

However, there are concerns that the deal will provide a boost to one country at the expense of other regions of the UK, and that it may not represent value for money.

"Taxpayers resent politicians cooking up deals behind closed doors that invariably end with their cash being thrown wherever is politically advantageous rather than where it could be best spent," TaxPayers' Alliance research director, Alex Wild, said.

"The unfair way in which money is allocated between the home nations has been clear for decades, best illustrated by the significantly higher levels of public spending in Scotland than in considerably poorer parts of England.

"But until there is a major decentralisation of tax raising powers, Westminster politicians will always be able to dish out taxpayers' cash in a way that benefits them more than the general public."