The UK employment rate was the joint highest on record between February and April, but inflation outstripped pay rises, according to Office for National Statistics (ONS) released today.

They show that regular weekly earnings for employees, excluding bonuses, increased by 1.7% over the three months, but that inflation increases resulted in real wages falling by 0.6%.

"The cost of Brexit to people's living standards due to the fall in the pound is becoming ever more apparent." PwC senior economist, John Hawksworth, said.

"With inflation likely to be heading above 3% this year, the squeeze on real pay growth is now getting serious and is likely to dampen real consumer spending growth for some time to come."

Real wage growth since April 2006 is shown below: 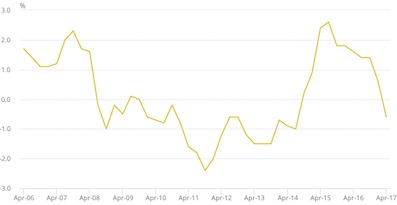 The squeeze on wages is even more severe in the public sector, growing at around 1%, according to Hawsworth, who said that nurses, doctors and teachers could see a further hit to their earnings as inflation rises later in the year.

This comes after it was reported yesterday that inflation hit 2.9% in May - the highest rate recorded since June 2013 - suggesting that there might have been an even sharper fall in real wages last month.

Rising prices for recreational and cultural goods and services were cited as the main reason for the latest inflation increase, with the fall in value of the pound continuing to result in more expensive imports.

The Bank of England (BoE) have said that inflation will peak at a little below 3% in the fourth quarter of 2017, however, the latest figures indicate that inflation projections are ahead of schedule.

This has led to some calls for interest rates to rise, however, it is unlikely to happen in the short-term, according to Hargreaves Lansdown senior economist, Ben Brettell.

"The evidence so far points to a sharper rise than anticipated," he said. "However, the balance of probability suggests the BoE will continue to 'look through' higher inflation and leave rates on hold to support the economy."

Sign up to our free newsletter here and receive a weekly roundup of news concerning the actuarial profession
This article appeared in our June 2017 issue of The Actuary.
Click here to view this issue
Filed in:
06