State pension will not be sufficient cover for millennials

Millennials will need to take steps to supplement their retirement incomes because public pensions will not provide as large a safety net as they did to earlier generations, the International Monetary Fund (IMF) has warned. 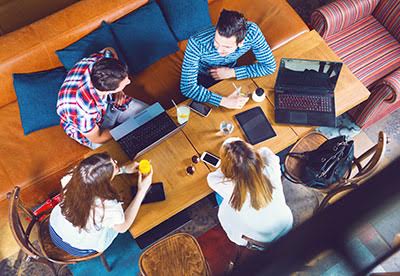 Government spending on pensions has increased in advanced economies from an average of 4% of GDP in 1970 to almost 9% in 2015, largely due to ageing populations.

However, IMF senior economist, Mauricio Soto, writes in the organisation's Finance and Development publication that public pension expenditure per elderly person of around 35% is projected to decline to less than 20% by 2060.

"This means that younger generations will have to work longer and save more for retirement to achieve rates similar to those of today's retirees," he said.

"Simulations suggest that if those born between 1990 and 2009 put aside about 6% of their earnings each year, they would close half of the gap relative to today's retirees."

However, Soto warned that saving more relies on a "hard-to-achieve mix of fortune and savvy", which requires continuous and stable earnings, intelligent investing and decision making in regards to spending savings during retirement.

He justifies working for longer by arguing that it can help people maintain their health, and enhances long-term economic growth, as well as helping governments' ability to sustain tax and spending policies.

How additional years of work could correspond to increased savings is shown below: 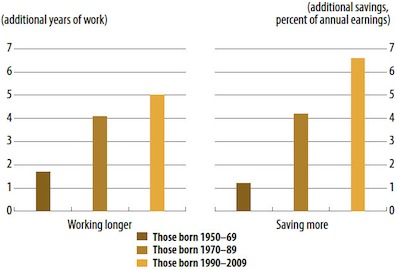 Soto says that the government can make it easier for individuals to remain in the workforce for longer by reviewing taxes and benefits that might favor early retirement.

He believes that boosting financial literacy and making the workplace more friendly to older workers could also help, but that efforts to promote longer work lives should be accompanied by adequate provisions to protect the poor, whose life expectancy tends to be shorter than average.

"The good news for younger workers is that retirement is some four decades away, allowing time to plan for longer careers and to put money aside for later. But they must start now," Soto added.