The collective retirement savings gap of the worlds largest economies is expected to rise from $70trn (£54.5trn) to more than $400trn by 2050.

That is according to a report by the World Economic Forum (WEF), which highlights how ageing populations will impact funding gaps in the US, UK, Japan, Netherlands, Canada, Australia, China and India.

It argues that the deficit is set to grow faster than global GDP, setting the industrialised world up for "the biggest pension crisis in history" unless governments intervene.

"The anticipated increase in longevity and resulting ageing populations is the financial equivalent of climate change," WEF head of financial and infrastructure systems, Michael Drexler, said.

"We must address it now or accept that its adverse consequences will haunt future generations, putting an impossible strain on our children and grandchildren."

The savings gap resembles the amount of money that countries will need in order to provide each person with a retirement income equal to 70% of their pre-retirement wage.

Out of the eight countries studied, the US was found to have the biggest savings gap, which is expected to rise from $28trn to $137trn by midway of this century, while the UK has the biggest deficit in Europe.

The current and projected gaps ($trn) by country are shown below: 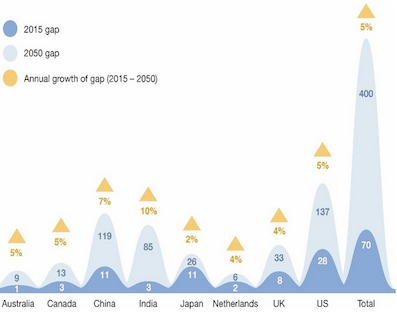 The report argues that for countries where future generations have a life expectancy of over 100, a retirement age of at least 70 should be the norm by 2050.

It also suggests that saving be made easier, through initiatives such as pension auto-enrolment, while financial literacy education should be offered throughout people's careers.

In addition, it highlights the importance of explaining pension systems and the benefits they bring, as well as making citizens aware of their financial positions easily through methods such as online dashboards.

"The retirement savings challenge is at crisis point and the time to act is now," Mercer health and wealth president, Jacques Goulet, said.

"There is no one 'silver bullet' solution to solve the retirement gap. Individuals need to increase their personal savings and financial literacy, while the private sector and governments should provide programmes to support them."