PM Theresa May has announced a cap on social care costs after concerns were raised that families could face bills of up to 79% the value of their homes under plans in the Conservative manifesto published last week.

The original proposals involved including the value of homes when means-testing those who receive social care, with the government only assisting people with less than £100,000 of assets.

However, the PM appeared to backtrack today by insisting there would be a limit on care costs, despite the work and pensions secretary, Damian Green, telling the BBC yesterday that the Conservatives "won't look again" at the plans.

"This manifesto says that we will come forward with a consultation paper, and that will include an absolute limit on the amount people have to pay for their care costs," May said today.

"We will make sure nobody has to sell their family home to pay for care. We will make sure there's an absolute limit on what people need to pay. And you will never have to go below £100,000 of your savings."

This comes after analysis by Royal London showed that, under the original plans, those living in London, would on average, have to pay nearly four-fifths the value of their home on social care costs before it becomes available for free.

Average house prices and the potential social care bills by region are shown below: 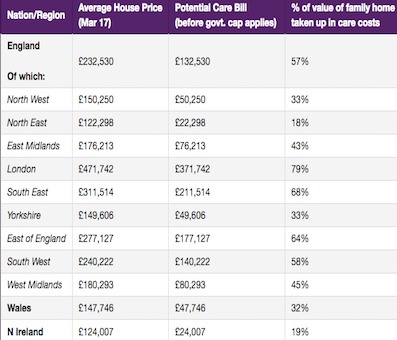 "Paying for care looks set to become a regional lottery," Royal London director of policy, Steve Webb, said at the time. "If these changes are implemented, more families will be at risk of seeing a large part of the value of their home wiped out by care costs later in life."

Plans to make greater use of 'deferred payments' in order to claw back costs could further highlight the 'regional lottery' of social care, according to the analysis.

Under the rules, people living in residential care can ask a local authority to meet their care bills, and in return, the council will recover the money plus interest from the later sale of a family home.

However, it was found that the effectiveness of the scheme varies hugely from area to area, with some local authorities entering into several hundred agreements with local residents, while others have made none.

Those in London were found to be particularly reluctant to use the scheme, with one borough saying that they had received no requests to set up arrangements, suggesting that residents were not aware of their right to defer payments.

"If far more people are going to face deferred charges in future because of the inclusion of the value of family homes in the means-test for social care, the government will need to investigate very quickly why the present system is not working properly," Webb added.