200,000 immigrants needed each year in UK to avoid 'economic catastrophe'

Net migration will need to be well in excess of 200,000 a year to address the UKs ageing population and low productivity growth, according to a report from the think tank Global Future. 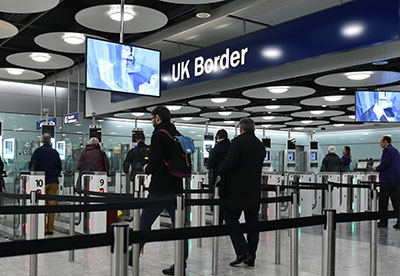 It argues that failure to ensure this could result in "catastrophic consequences for the economy", with whole sectors likely to collapse, many of which are already on a "labour shortage cliff-edge".

In addition, it says significant immigration will be needed to alleviate the crisis in public services such as the NHS and social care, and the only reason to reduce it below the levels suggested would be if there were an economic growth crash.

"The previous and current government's target of cutting net migration to the tens of thousands immediately or in the long-term is based on an outdated and backward-looking view of policy in this area," the report states.

"It shows that making substantial cuts in immigration to these levels is not only very difficult but also overwhelmingly undesirable."

The report explores three critical areas in order to assess the future migration needs of the UK, which are employment levels, the working-age population, and productivity.

It argues that the UK's historically low unemployment rate means the economy is running on a very tight labour market, with virtually all employment growth in the last year due to foreign-born workers.

As well as this, the number of people of working age versus those over 65 fell from a ratio of 5.5 to 3.5 between 1950 and 2015, with the working population now needed to double over the next 33 years just to maintain the current ratio.

In addition, the country's productivity has been severely hit since 2007, falling from a 2% increase each year to just 0.6% in 2016, with GDP growth overwhelmingly reliant on more workers on longer hours.

The report suggests that the fall in value of the pound, and perceived cultural hostility to outsiders since the Brexit vote, means that many employees may leave the UK, and that new government policy is needed to address this.

"We believe that priority should be given to clarifying the position of EU nationals in order to prevent an unwanted exodus from the UK, and that the government should refrain from setting artificial targets for net migration," it says.

"Politicians and political parties in this general election should have the courage to speak out and make the positive case for net migration to continue at a level of at least 200,000 people a year."