The employment rate in the UK increased to 74.8% in the first quarter of this year, the highest since comparable records began in 1971, according to statistics from the Office for National Statistics (ONS) released today.

The employment rate in the UK increased to 74.8% in the first quarter of this year, the highest since comparable records began in 1971, according to statistics from the Office for National Statistics (ONS) released today. 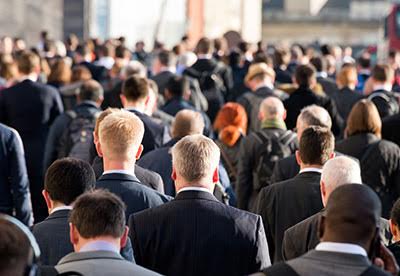 They reveal that the unemployment rate was at the lowest since 1975, falling from 5.1% last year to 4.6%, with 122,000 more people in work compared with the previous three months.

However, the latest estimates show that average weekly earnings for employees in real terms fell by 0.2% excluding bonuses, compared with a year earlier, after it was revealed yesterday that inflation is at the highest rate since June 2013.

"Employment growth appears to be picking up again after a slowdown in the second half of last year," PwC senior economic adviser, Andrew Sentance, said. "The numbers in employment were up by over 120,000 in the first quarter of this year - the biggest quarterly increase since the EU referendum."

"The pick-up in employment growth is encouraging. But the fact that wage growth is not keeping up with price inflation does not bode well for consumer spending - which has been a key factor contributing to UK economic growth in recent years."

Scotland recorded an unemployment rate of 4.4% in the first three months of this year - lower than the rest of the UK as whole - with the statistics showing employment in the country increased by 5,000.

The UK employment rate since 1971 is shown below: 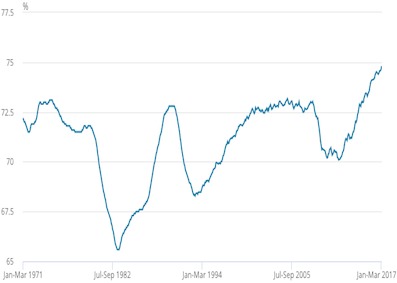 It was also found that there were 26.41 million people employed in the private sector for December 2016, 92,000 more than for September that year, however the number of those working in the public sector was basically unchanged.

"These latest figures contain mixed news for future UK economic prospects. Construction and private services are the main sectors generating jobs in the UK, However, employment is flatlining in manufacturing and the public sector," Sentance continued.

"The vacancy rate also points to a pick-up in the demand for labour. The number of unfilled vacancies has risen to its highest level since the current data series started in 2001."