The consumer price inflation rate in the UK is now at 2.7%, up from 2.3% in March, and 0.3% a year ago, according to figures from the Office for National Statistics released today.

The consumer price inflation rate in the UK is now at 2.7%, up from 2.3% in March, and 0.3% a year ago, according to figures from the Office for National Statistics (ONS) released today. 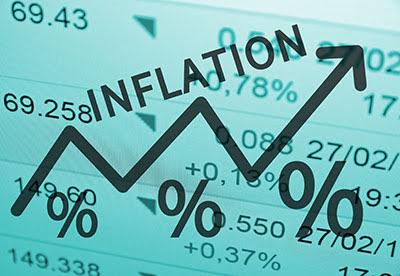 This is the largest year-on-year rise since 2007, and the highest rate seen since June 2013, with higher air fares around Easter time the main contributor to the increase.

The Bank of England (BoE) said last week that inflation would peak at a little below 3% in the fourth quarter of 2017, however today's figures are two months ahead of its 2.7% forecast for the end of the second quarter, and above its 2% target.

"Inflation has risen to its highest level since the autumn of 2013, and this is adding to the squeeze on consumer spending shown in the latest retail sales figures," PwC senior economic adviser, Andrew Sentance, said.

"We should expect this rise in inflation to continue as the impact of the weakness if the pound feeds through into higher prices for imported goods and services.

"It is set to rise to around 3% or higher in the months ahead - with prices likely to be rising faster than wages. The resulting squeeze on consumer spending will reinforce the slowdown in economic growth we are now seeing."

Rising prices for clothing, vehicle excise and electricity also contributed to the increase, although these were partially offset by a fall in motor fuel prices between March and April, compared with same time last year.

UK consumer price inflation since April 2007 is shown below: 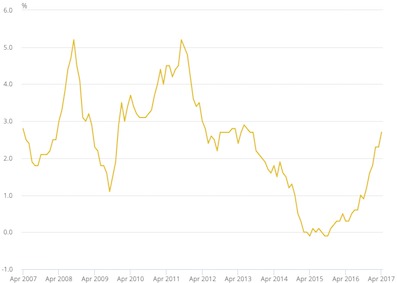 Rising inflation has led to some calls for interest rates to rise, however, the Bank of England decided last week to keep them at a record low of 0.25%, while quantitative easing programmes were capped at £435bn.

This is likely to remain the case unless there are any sudden inflation rises, according to the Share Centre economic commentator, Michael Baxter, who believes that it is actually subdued in the west.

"A few months ago, many economists were forecasting that inflation would be much closer to 3% by now," he said. "The pattern of the last few weeks, not just in the UK, but the US and euro area, is that inflation is surprising on the downside.

"Although one member of the BoE's monetary policy (MPC) voted for a hike in interest rates, the minutes made it clear that other members will only vote for a rise if inflation starts surprising on the upside. So far, this has not happened.

"There is nothing in today's data to suggest that the MPC will deviate from its current course. The odds of an increase in UK interest rates later this year are diminishing."