More than £500bn in assets under management for investment platforms

UK Investment platforms reported a 3% increase in assets under administration in the first quarter of 2017, with the collective value now at £520bn, according to research by Fundscape.

Platforms also experienced record-breaking gross and net sales of £29bn and £13.3bn respectively, in stark contrast to the beginning of last year, when economic factors and Brexit fears were acting as deterrents to investment.

It is thought that the increase was mainly driven by the government's pension reforms in 2015, while substantial individual saving account (ISA) sales were also a significant factor.

"After three difficult quarters, investor sentiment began to improve in the last quarter of 2016, and gathered momentum in the first three months of 2017," Fundscape CEO, Bella Caridade-Ferreira, said.

"Most ISA business is now written in the second quarter, but the first quarter was one of the strongest on record for ISA flows. Nonetheless, pension business was the real driver of platform flows.

"Fuelled by demand for defined benefit (DB) transfers and access to pension freedoms, net pension sales were up 27% on the previous quarter and 44% on like-for-like sales in 2016."

The industry's assets and sales by product in the first quarter of 2017 are shown below: 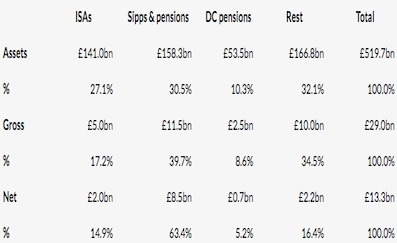 There was no change in the top five platforms for assets under management, which between them account for roughly two thirds of the industry's assets, with Cofunds ranked top with £86.8bn.

It also recorded the highest value of gross sales with £5.2bn, while Aviva toped the table of platforms for asset growth with 13.9%, although Aegon and AJ Bell also saw double-digit growth figures.

Almost every platform experienced higher net sales in the first three months of this year, with Standard Life top of the pile with £1.9bn, even though it is ranked fourth for assets under management.

"Despite the likelihood that the industry will be buffeted by geopolitical headwinds this year, we expect platform business to maintain a steady course," Caridade-Ferreira, continued.

"Pension activity will be the driver. Accessing pension freedom through DB transfers is a top priority for investors nearing retirement, and this will keep the industry buoyant throughout 2017 and well into 2018."

any of our offices
Competitive
Reference
123786
END_OF_DOCUMENT_TOKEN_TO_BE_REPLACED