Ball in a globe

The Worshipful Company of Actuaries was formed in 1979 as one of over 110 City Livery Companies. Its aims include supporting the City of London and raising money for charity. 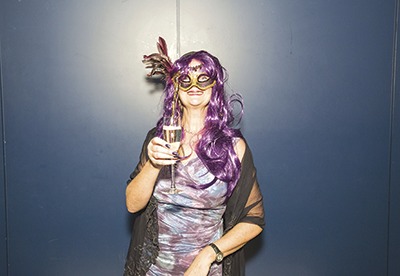 The Worshipful Company of Actuaries was formed in 1979 as one of over 110 City Livery Companies. Its aims include supporting the City of London and raising money for charity. Membership is open to fellows and associates of the IFoA.

On 8 February, its current Master, Sally Bridgeland, welcomed over 200 members and guests to the first ever Actuaries' Masquerade Ball at The Underglobe. It was a fantastic evening showcasing three inspirational charities, with dancing, auctions and a mathematics teacher come stand-up comedian as the MC.

The Underglobe must be one of London's unknown hidden gems - being exactly where it says it is, under the Globe Theatre.

Guests dined, socialised and danced in an atmospheric open space bejewelled for the evening with tables, candelabra, dessert and cheese buffet stations as well as displays about the charities. The first charity to present was XLP, whose aim is to identify, work with and channel youngsters to a better life, who might otherwise find themselves getting sucked into gang wars, knife crime or worse. XLP were followed by Tearfund, which auctioned an evening with Will Torrent (pastry chef and chocolatier) for £2,000. And finally Link Age Southwark who support over 500 isolated older people in south London. The Master's theme of people in need of help - the young, the old and the poor - was very much to the fore.

Entertainment was provided by The Dance Equation, a group which goes into schools to bring maths alive through the medium of dance, by St Olave's School Jazz Band - over 20 youngsters performed big band sounds - and by Old Hat Jazz Band to dance the night away.

The evening raised around £25,000 for the supported charities.