The UKs CO2 emissions from energy use fell by 4.8% last year, in comparison with a 0.4% decrease for the EU as a whole, according to estimates from Eurostat released today.

Britain was one of 11 member states to record decreases in 2016, and was included in the top five performers with Malta, Bulgaria, Portugal and Luxembourg, while major countries like Germany, France and Spain all saw emissions increase.

This is thought to be largely due to Britain's uptake of green energy, with a quarter of the country's electricity generated by renewables last year - up from just 5% in 2007.

RenewableUK executive director, Emma Pinchbeck, told The Actuary: "The massive expansion in renewable energy over the last decade is one of the main reasons the UK's carbon emissions fell by nearly 5% last year.

"When it comes to taking effective, practical action on climate change, onshore and offshore wind are playing key roles by offsetting more than 17 million tonnes of carbon emissions a year.

"Wave and tidal energy are scaling up to become significant clean power sources too. Offshore wind alone is generating 5% of the UK's power and that's set to double by 2020, so we'll be getting at least 30% of our electricity from renewables by the end of this decade".

Each EU member state's change in CO2 emissions last year, in comparison with 2015, is shown below: 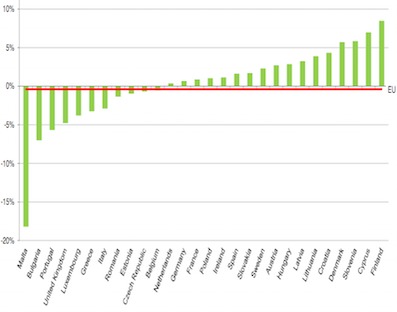 CO2 emissions are estimated to account for around 80% of all EU greenhouse gas emissions and are influenced by climate conditions, economic growth, population size, transport, and industrial activities.

Stakeholders are now being urged to take further action to reduce emissions, in order to meet targets set out in the Paris agreement to keep global temperature rises well below 2°C.

"Further action will be needed to ensure that the UK fulfils its clean energy commitments overall," Pinchbeck said. "The economic benefits of making the transition away from fossil fuels are huge."

The Eurostat figures are early estimates based on monthly energy statistics and may slightly differ from those published nationally.