Mercers pensions risk survey has found that the accounting deficit of defined benefit (DB) pension schemes for the UKs 350 largest listed companies fell from £137bn at the end of February to £133bn on 31 March 2017. 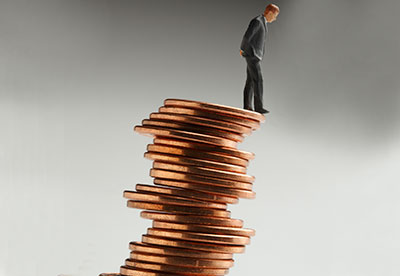 Asset values reached £739bn, a £4bn increase over the month, while liability values were unchanged at £872bn compared to the value at the end of February.

Mercer said latest projections from the Continuous Mortality Investigation suggested a reduction in life expectancies compared to the previous version of the model as people were still living longer but recent improvements have been lower than previously expected.

This adjustment could remove around £28bn of pension scheme liabilities, Mercer said.

Its head of DB Solutions Alan Baker said: "In some sense, March has been a fairly steady month and we've seen a small improvement in funded status from that calculated at the end of February.

"The quoted funding level improved slightly from 84% to 85% but liabilities remained stable due to the lack of change in corporate bond yields or long-term market implied inflation."

He said though deficit remained "still well over double what it was at the end of March 2016 and, historically speaking, the pressure on pension schemes and sponsors remains a serious concern. In that context, clear risk management plans and an emphasis on reducing risk where possible remain crucial."

Mercers partner Le Roy van Zyl said the triggering of Article 50 by prime minister Theresa May had had very little impact on pension scheme deficits, as markets had anticipated this but pension deficits would be sensitive to emerging conditions, and unexpected developments.

This article appeared in our April 2017 issue of The Actuary.
Click here to view this issue
Filed in
04
Topics
Pensions