Enjoyable events with the Other Half Club

The end of 2016 was a busy time for the Other Half Club, a social club for the wives and partners of actuaries. 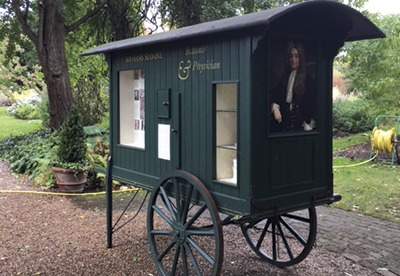 The end of 2016 was a busy time for the Other Half Club, a social club for the wives and partners of actuaries. We held a well-attended dinner at Café du Marché, Charterhouse Square, London and organised two daytime events.

We made a return visit to the Chelsea Physic Garden, founded in 1673 for training apprentices in the use of medicinal plants, followed by a leisurely lunch at their Tangerine Dream Café. Sir Hans Sloane, a wealthy doctor, became its main benefactor when he leased the site to the Apothecaries for £5 per annum in perpetuity. He introduced chocolate to England from Jamaica, and it was made and sold by the Apothecaries, initially as a medicine. A reproduction of a street cart used for selling drinking chocolate is shown above.

Our second event was a visit to Angels Costumes, based in Hendon. They have dressed stars of stage and screen since 1840. Their 'Behind the Seams' tour showcases their extensive collection of a million items, stored on eight miles of rails. They have supplied costumes to Oscar and BAFTA winners and we saw these and costumes from recent television series, including Downton Abbey.

In 2017 we have a visit planned to Dennis Severs' House in Folgate Street, Spitalfields, and an eagerly anticipated tour, with supper, at the Whitechapel Bell Foundry. This is thought to be Britain's oldest manufacturing company, established in 1570.

New members are always welcome. If you feel you would like to join us, please contact me or Lesley Birse at: [email protected]

This article appeared in our April 2017 issue of The Actuary.
Click here to view this issue
Filed in:
04
Also filed in:
People & Social News