Global disaster events resulted in $54bn of insured losses in 2016

The findings show that there were 327 disasters events last year, 191 of which were natural catastrophes, and 136 were man-made, with North America accounting for half the global insured losses.

This was largely due to a record number of severe storms in the US, where the level of insurance penetration for such events is high, as well as disasters in Canada, which also had sufficient insurance coverage.

The sigma report states: "Many tens of thousands of policyholders in disaster events benefitted from having insurance cover to mitigate economic and humanitarian hardships.

"For example, wildfires in Canada devastated many homes and around 88,000 people were evacuated. In response, insurance personnel were given access to the affected regions to provide immediate assistance.

"The outcome was that 68% of all personal property claims had been settled by the end of the year."

However, there were some regions that were not as well equipped to recover from disasters, with an earthquake on Japan's Kyushu Island inflicting the single heaviest economic loss last year - of which just 20% was covered by insurance. 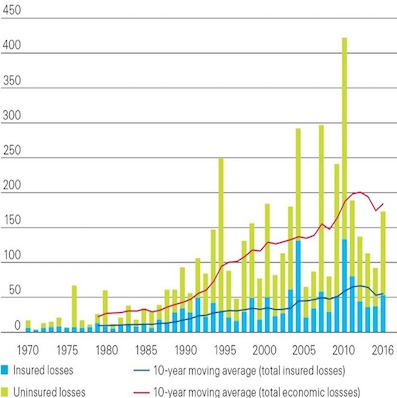 Swiss Re, chief economist, Kurt Karl, said: "In 2016, both economic and insured losses were close to their 10-year averages. Insured losses made up about 30% of total losses, with some areas faring much better because of higher insurance penetration.

"In many parts of the world, insurance can play a much bigger role in helping households and communities recover from the losses and shock that disasters can inflict."