Billions worth of investment lost due to 'inadequate' telecoms infrastructure

The UK is the worst country in Europe for availability of fiber broadband to the premise (FTTP) and ranked 54th in the world for 4G coverage, potentially costing the British economy billions of pounds. 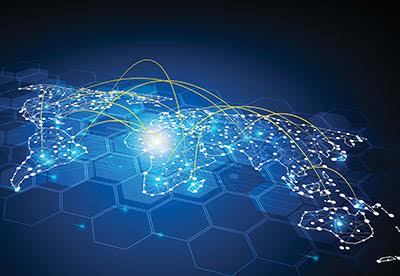 That is the opinion of an independent telecoms broker which claims businesses are being forced to pay up to 10 times more for their internet connection than they would need to if the UK's infrastructure were at the same level of many countries in Europe and across the world.

This is not as much of a concern to big firms, who can afford to pay for dedicated circuits, but is hurting small businesses who have limited resources, with half of UK businesses currently without access to cheap fiber broadband.

Equinox Business Consulting director, Dave Millett, told The Actuary: "The bigger companies, your Barclays and the like, can buy these big data circuits, it is the medium and small businesses, like start-ups that are being hit. Their broadband won't cope.

"There is no fiber for them, so the next step up is going to cost around £300 a month rather than £30. That's money that they are not going to be able to invest somewhere else.

"The EEF (an industry body for engineering and manufacturing employers) estimates that its average member spends £5,000 a year on internet, which accumulatively is billions of pounds - the cost to the economy is vast.

"That could be invested in people, equipment, exports - and this is what the government is missing by not improving telecoms infrastructure, they are causing our businesses to not be able to invest."

Millett said that BT's current monopoly on laying the pipes and telephone cables that connect nearly all businesses and homes in the UK, was partly to blame, which it does through its subsidiary company Openreach.

The telecoms company is accused of pushing its fiber to the cabinet (FTTC) services, which offer lower speeds using a blend of a traditional copper wire cable and fiber optic cable, in comparison to FTTP, a pure fiber-optic cable connection.

"It's very easy to kick BT but it is partly to blame, its focus has been on sweating its copper asset, it has laid mile after mile of copper across the country, and putting copper into the cabinet has saved it money," Millett continued.

"Its strategy has been to roll it out to residential premises as a priority because then it can sell its TV packages. That is why large swathes of London have no fiber broadband, most business parks don't have it.

"With people moving their email and CRM systems to the cloud, the demands of the internet are ever increasing. The government has offered for fiber to be rolled out to special areas, but every contract is given to BT."

Places like Latvia and Lithuania have more than one in three premises with FTTP broadband access, while the UK has one in 50 and a 4G network that is worse than it is in Romania, Albania, Panama and Peru.

The top 10 countries' (and the UK's) 4G coverage as a geographical percentage is shown below: 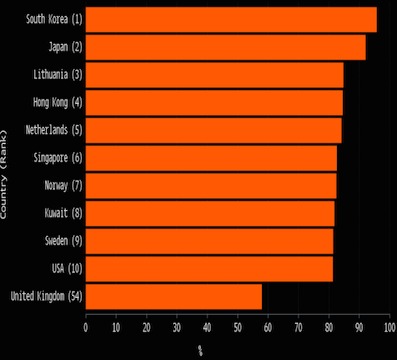 Millett suggests three steps to address this situation that would be of little cost, but would take "political will", which are:

1) Formally separate Openreach so they can be directed by the national interest rather than BT's
2) Split OFCOM up so that they focus on telecoms only, with stronger powers and stronger remits, so issuing licenses is based on how quick the coverage will be rolled out
3) Tell mobile networks to allow cross-network roaming in the UK, forcing providers to improve their coverage, which "governments have been weak on".

In December last year, the National Infrastructure Commission produced a report bringing attention to the inadequacy of the UK's telecoms infrastructure, while the chancellor has recently announced investment towards a "full-fiber" network, which Millett believes are early signs of progress.

He added: "I think up until now people have muddied the waters, so the positive thing is that we have recognised that we are bad.

"Hammond's investment is more than before, so I think we are making early tentative steps, which I hope we make into more of a brisk walk - and then let's make that into a run."
This article appeared in our January 2016 issue of The Actuary.
Click here to view this issue
Filed in:
01