Rising income equality and societal polarisation triggered by political change in 2016 could exacerbate risks worldwide if urgent action is not taken, according to the World Economic Forums (WEF) Global Risks Report 2017.

Rising income inequality and societal polarisation triggered by political change in 2016 could exacerbate risks worldwide if urgent action is not taken, according to the World Economic Forums' (WEF) Global Risks Report 2017.

These, as well as climate change, were identified as the top three trends that will shape global development over the next 10 years, with collaborative action needed by world leaders to avert further hardship and volatility over the next decade.

An example of this was seen last year when a number of countries, including China and the US, ratified the Paris Agreement, however political change in Europe and North America has put this at risk.

"Urgent action is needed among leaders to identify ways to overcome political or ideological differences and work together to solve critical challenges," WEF head of global competitiveness and risks, Margareta Drzeniek-Hanouz, said.

"The momentum of 2016 towards addressing climate change shows this is possible, and offers hope that collective action at the international level aimed at resetting other risks could also be achieved."

The report identifies 'extreme weather events' as the most likely risk to occur this year, with 'weapons of mass destruction' the risk with the biggest potential impact. 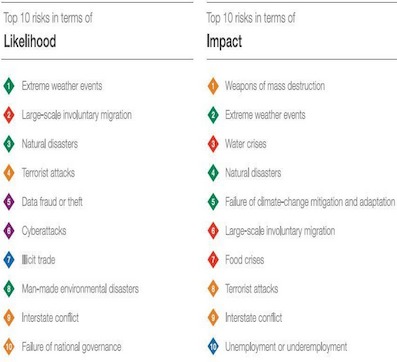 The research also found high structural unemployment and profound social instability to be the most interconnected pairing of risks, with 2017 expected to present a 'pivotal moment' for the global community.

In addition, artificial intelligence and robotics were identified as having the greatest potential benefits, the most potential negative effects, and the greatest need for better governance.

Marsh president of global risk and specialities, said: "Artificial intelligence will enable us to address some of the great issues of our age, such as climate change and population growth, much more effectively.

"With investment into AI now 10 times higher than it was five years ago, rapid advances are already being made. However, increased reliance on AI will dramatically exacerbate existing risks, such as cyber, making the development of mitigation measures just as crucial."