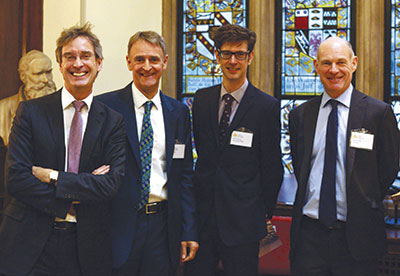 It was the consensus that the UK was heading toward a 'hard' Brexit, which would be likely to result in limited access to the single market. Alternative model EU trade agreements do exist, although each of these has its own pros and cons and requires time to negotiate - a luxury the UK might not necessarily have - with each being focused on goods rather than services.

A hot topic in the financial services industry is around the implications of Brexit on passporting. One should consider not only current arrangements but also the opportunity cost of lost future endeavours.

What is clear is the immediate impact Brexit has had on the financial markets and the value of the GBP. This could result in an extended period of low growth, including low interest rates. The real threat remains the impact of inertia and the loss of investments in the short and medium term.

It was made clear that Brexit may also provide some opportunities to the financial services markets, including the prospect for the UK to review Solvency II capital requirements and methodology. It was made clear that equivalence does not necessarily mean exactly equal, and that the UK could maintain a level of proportionate response in establishing this.

Other opportunities discussed include the ability of the UK to negotiate individual trade deals with foreign countries, which might be better than those attained by the EU, although this depends on whether one thinks the EU has a stronger or weaker bargaining position.

Other areas of consideration would be around data protection, freedom of movement of people, including both skilled and unskilled, and EU laws.

This article appeared in our December 2016 issue of The Actuary.
Click here to view this issue
Filed in:
12
Also filed in:
People & Social News