Gene-eggtics at the autumn livery dinner

The Worshipful Company of Actuaries autumn livery dinner was held in the grand and artistic surroundings of Painters Hall on 6 October. 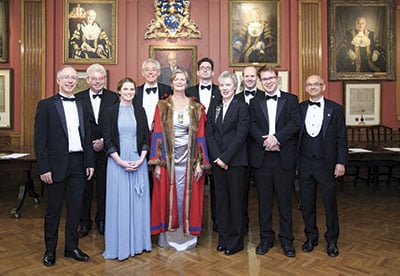 The Worshipful Company of Actuaries' autumn livery dinner was held in the grand and artistic surroundings of Painters' Hall on 6 October. Master Sally Bridgeland was delighted to introduce 10 new members to the assembled company, and we all enjoyed the customary delicious dinner with fine wine.

A particular treat was a private musical interlude, performed by award-winning acoustic guitarist Will McNicol, which took us on a virtuoso musical journey. The music continued with immediate-past Master Thompson back at the piano to accompany us for the traditional City grace and toasts before the evening's speeches.

Liveryman Ronnie Bowie welcomed the Company's guests with humour, using Harry Potter language to pay tribute to our "pureblood" guest, the Master Framework Knitter, the first Master who is the daughter of two past Livery Company Masters (a Farmer and a Framework Knitter). His theme of genetics fitted the expertise of Sir John Chisholm, executive chair of Genomics England, who spoke with passion about his involvement with the 100,000 Genomes Project.

Master Bridgeland shared her thoughts on life as a lady Master and the social and charitable programme for the Company's year. Her thank you gift to Sir John and his wife Lady Kitty, echoing the egg-timer emblem of the Livery badges, was personalised egg cups and eggs from her own chickens, as well as a cheque for the Marie Curie cancer care charity from the Company of Actuaries Charitable Trust Fund (CACT).

The Master closed proceedings by touching on the research project that is being sponsored by CACT into the life expectancy of residents of Whiteley Village (one of the oldest charitable retirement communities in the UK). She also took the opportunity to remind everyone about the Charity Masquerade Ball on 8 February at the Globe.

Find out more about the Company and forthcoming events at www.actuariescompany.co.uk.

This article appeared in our December 2016 issue of The Actuary.
Click here to view this issue
Filed in
12
Also filed in
People & Social News