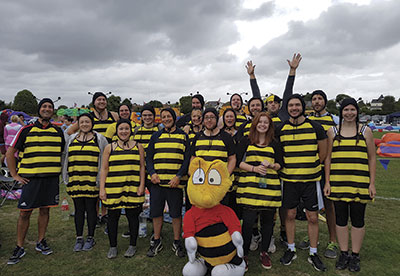 On Saturday 3 September, 20 bees from the JLT Exeter office turned up for Force Cancer Charity's 'It's a knockout' fun day at Topsham Rugby Club. Both teams - 'The bee's knees' and 'Bee the best' - were buzzing in anticipation as they lined up against other teams of flamingos, Jedis, superheroes and Ketchup bottles.

The day was split into two, with dry games in the morning followed by wet games in the afternoon. The bee's knees flew into action and took an early lead but were soon caught and overtaken on points by Bee the best. This would be how the teams would sit for the rest of the morning, but, by lunch time, the lead held by Bee the best had been reduced to just four points. The dry games were a series of inflatables combined with basketball shooting, blind dragons, jumbo darts and more.

Shortly after the lunch break was called, the heavens opened and the JLT bees scattered for cover. Much like honey bees' inability to fly in the rain, this proved to be the teams' downfall throughout the afternoon.

As the afternoon began, the already sodden bees began diving through obstacles, transporting jugs of water in a human caterpillar and collecting anything from balls, jokes and puzzle pieces, all the while getting wetter and wetter, struggling to fly on, with their wings limp but heads still held high. Surviving with only scrapes and bruises, the day came to its extremely drenched end.

The ultimate sting in our tail was the final position of 10th and 12th out of 42 teams, but we were thrilled to have been part of the challenge, which had managed to raise over £15,000.

Force is a local cancer charity based in Exeter, which aims to give anybody diagnosed with cancer the best possible treatment and support close to home. Daily they provide physical, emotional psychological and practical support to those in need.

This article appeared in our December 2016 issue of The Actuary.
Click here to view this issue
Filed in
12
Also filed in
People & Social News