Investors are minimising their risk profiles due to uncertain global markets, with Brexit the biggest concern according to NN Investment Partners (NNIP) Risk Rotation Index. 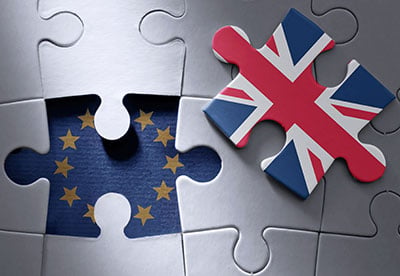 Half of all investors viewed Brexit as a threat to their investment strategy, with 32% citing it as "very significant" and 18% as "slightly significant".

The next biggest concerns to investors were the Eurozone crisis, a black swan event and Emerging Markets, with 41%, 30%, and 24% describing them as significant threats respectively.

NNIP Senior Strategist Multi-Asset, Patrick Moonen, said: "With the ramifications of Brexit set to continue for the foreseeable future, it is clear that more and more investors are adjusting their risk profile to protect their investments from market volatility resulting from these developments.

"The research also reveals that those who have a more negative outlook on the impact of Brexit are also more likely to have decreased their risk portfolio, with half of respondents who viewed Brexit as a 'very significant' risk also stating that they had decreased their exposure to risk."

This is the first time that overall risk has fallen into negative territory since October 2014, when it fell to -0.6%. 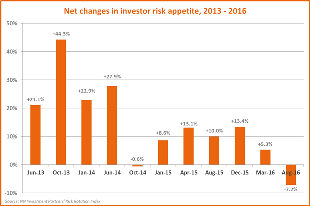 In addition 30% of professional institutional investors claimed that their risk appetite had decreased in six months, with 8% citing their appetite as "significantly" decreased.

"As we enter this period of uncertainty it is more important than ever for investors to be able to highlight pockets of opportunity so as to capitalise on the existing market uncertainty."

When asked about the most attractive geographical markets in terms of risk versus return over the coming six months, investors ranked Emerging Markets most highly, with 29% viewing it as the most attractive region.
This article appeared in our October 2016 issue of The Actuary.
Click here to view this issue
Filed in:
10