Just 6% of people aged over 45 have made financial plans to pay for their future care needs, a survey by Just Retirement has found. 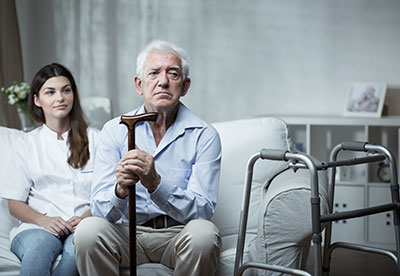 A growing number of them felt it would be helpful for local councils to refer enquiries to independent financial advisers, the company's fifth Care Index report found, but few had consulted such advisers on their own initiative.

Results showed that councils were often the first port of call for information on accessing and paying for care, but 44% of respondents thought it should be standard policy for councils to refer people to financial advisers, and 56% thought such referrals would be helpful, up from 51% last year.

Results showed however, that financial intermediaries rank low when people consider sources of information, cited by only 9% of respondents.

The charity Age UK was mentioned by 50%, local authorities by 26%, Citizens Advice by 24% while 18% would rely on family and friends.

Just Retirement group communications director Stephen Lowe said: "Left alone, most people won't take formal financial advice but they seem to be open to being 'nudged' in that direction.

"It may help save some of the estimated £425m a year of extra cost to taxpayers due to self-funders running out of money to pay care bills."

The survey found increased realism about meeting care costs, with only 16% of people under the impression that the state would meet these, well down on the 51% who believe this in the 2012 survey.

Increased awareness of care costs was also evident, with for the first time since 2012 respondents overestimating the average cost of residential care at £30,830 a year, £334 higher than industry figures suggest.

Despite this, only 6% of over-45s had included the cost of care in their financial planning although 18% of people aged over 75 had done so.

Lowe said the results showed greater awareness of care costs but that more work was needed from the industry and Government to build on the momentum.

He said: "This will ultimately pay dividends in the future if we find that more people are considering how to meet care costs and are using trusted sources of information and advice to make smart, sustainable choices.

"Given the sums of money and complexity involved, professional advisers have every reason to see themselves as a key part of the solution."

The survey also revealed a lack of understanding of products available. Equity release was well-known, but only 16% were aware of care annuities and 12% of immediate needs insurance, while 77% did not believe that financial products existed that would pay care fees for as long as they needed.

Lowe said: "The new measures that have been introduced by the Care Act had the potential to clear up some of the misconceptions about funding care, but that doesn't seem to have happened, with six in 10 still saying they are 'confused', perhaps as a consequence of key parts such as the cap on care costs being delayed.

"Regular news coverage of a care crisis is making people generally aware that big problems exist but lack of detailed knowledge of important rules such as means-testing limits or whether they will need to sell their home is leaving them in limbo when it comes to planning or taking action."

This article appeared in our October 2016 issue of The Actuary.
Click here to view this issue
Filed in
10
Topics
Health care