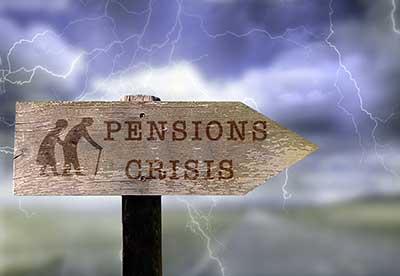 Instead, only significant rises in DC scheme contributions can successfully address the problem, it says.

Commenting on figures released by the ONS, Tom McPhail, Head of retirement policy at Hargreaves Lansdown said: "There is a great deal more work for the government, employers, individuals and the pensions industry to do before the problem is anywhere near fixed.

Many millions, in particular the growing legions of self-employed are still not in a pension and are being left behind, and contribution rates are a long way short of adequate."

McPhail continued: "The shift away from defined benefit pensions in the private sector, as well as many millions now being auto-enrolled on minimum contributions has exacerbated the widening gulf between public and private sector provision. The best answer for all will be to drag up the levels of private sector DC scheme contributions, to the point where they provide comparable benefits to the very generous public sector schemes."

However, he acknowledged, "This will inevitably cause financial pressures on both employers and employees at a time when they are trying to contend with spending constraints, and the uncertainty of Brexit."

The ONS's latest Occupation Pension Scheme Survey showed that between 2013 and 2014, active membership increased significantly from 8.1 million to 10.2 million, with the estimate at 11.1 million in 2015. The increase, almost entirely in the private sector, is likely to be due to the establishment of automatic enrolment, said the ONS. Estimates for the private sector showed a significant increase from 2.8 million to 5.5 million between 2013 and 2015.

Total membership of occupational pension schemes in the UK was 33.5 million in 2015, the highest level recorded by the survey, representing an increase of 10% compared with 2014 (30.4 million).