Great Fire of London would destroy £7.5bn worth of property today

The Great Fire of London would have wiped out more than £7.5bn worth of property if it had hit the capital today, according to analysis by Policy Expert. 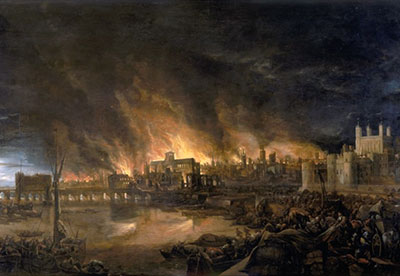 The fire, which took place between 2 and 5 September 1666, damaged approximately 13,200 homes, around a quarter of all the housing stock in the capital.

The home insurer said with an average London house price of £572,949, this would result the destruction of more than £7.5bn worth of property.

Adam Powell, head of operations at Policy Expert, said: "Fire damage is one of the largest causes for insurance claims and many of these are avoidable.

"While our analysis represents a current value for the buildings destroyed, it still doesn't even take into account the contents of these homes. The average home will have more than £20,000 worth of contents and it's often undervalued by the policyholder."

In July the Association of British Insurers (ABI) estimated the incident would cost insurers £37bn today.

To mark the 350th anniversary of the Great Fire of London, the ABI also urged the government with new legislation for compulsory sprinklers in all new schools, care homes and warehouses larger than 2,000m2.

This article appeared in our September 2016 issue of The Actuary.
Click here to view this issue
Filed in:
09
Topics:
General Insurance