Who did you want to be?

Who did you want to be? 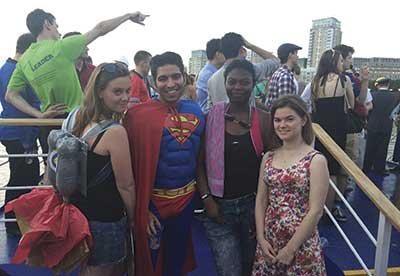 On Friday 22 July, over 180 actuaries boarded the Golden Jubilee Boat at Temple Pier for the annual SIAS summer boat party. Our theme this year was 'When I was three I wanted to be...' allowing our members to dress up as their childhood aspirations and idols.

Guests were welcomed with a goody bag on arrival containing some bubbles, paper aeroplanes and sweets to let them reminisce about their own third birthday! It was great to see everyone make such an effort with the theme, the array of different costumes was phenomenal. I would like to congratulate Alexander McRoberts in his cowboy-riding-dinosaur costume and Jessica Crowson in her little mermaid outfit for winning prizes for being best dressed male and female aboard. We also awarded best group costume to Alex Rossiter, Mark Cooper and Katarzyna Bilakiewicz who not only dressed as three blind mice, but stayed in character for the whole night.

The upper sun deck seemed to be the most popular part of the boat where people could enjoy drinks in the sun and unwind on a Friday night. All the sights of London passed us as we sailed up and down the river Thames and it was very entertaining as we all waved to the tourists on Tower Bridge and posed for their holiday snaps. Dinner was later served with guests enjoying a wide range of food, from hot dogs to burgers on the lower deck.

Our casino table proved to be a popular among the statisticians onboard, and congratulations to Emily Davies who won an Amazon Voucher for winning the Blackjack competition. Other highlights of the event included the cocktailpop station where Jack Daniels (yes that is really his name) was instantly freezing exotic cocktails to make ice lollies for our guests.

After dinner the dance floor was the place to be, with everyone showing off their moves. Time flew and soon we were docking back at Temple pier. Luckily, for those guests who didn't want to go home, we had an after-party at the nearby Opal Bar, where a majority of guests attended and rocked the dance floor until the early hours of the morning.

I would like to thank Capital Pleasure Boats for being so accommodating. Our next event is the 2016 SIAS Ball on 18 November where we will have a 'Cirque Le Soir' evening inspired by the circus. I look forward to seeing you there.
This article appeared in our September 2016 issue of The Actuary.
Click here to view this issue
Filed in
09
Also filed in
People & Social News