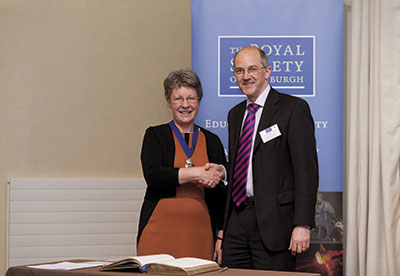 Earlier this year, he was elected as a Fellow of the Royal Society of Edinburgh, Scotland's National Academy of Science & Letters.

More recently, Cairns, who is professor of actuarial mathematics at Heriot-Watt University, was announced as this year's recipient of the 2016 Robert I. Mehr Award in recognition of his paper 'A Two-Factor Model for Stochastic Mortality with Parameter Uncertainty: Theory and Calibration', published 10 years ago in The Journal of Risk and Insurance.

The American Risk and Insurance Association presents the Robert I. Mehr Award each year for a paper that has best stood the test of time. It is one of the major international awards in the field of risk and insurance. Professor Cairns co-authored the paper with David Blake and Kevin Dowd.

The article considers the evolution of the post-age-60 mortality curve in the UK and its impact on the pricing of the risk associated with aggregate mortality improvements over time - so-called longevity risk.

Ten years on, the Cairns-Blake-Dowd (CBD) model proposed in the paper now serves as a benchmark in the field of longevity risk modelling and is widely used in the insurance industry. The article is now the most cited paper in the history of The Journal of Risk and Insurance.

This article appeared in our August 2016 issue of The Actuary.
Click here to view this issue
Filed in
08