The average amount a life assurance policy guarantees to pay up for lesbians, gay men, bisexuals and transgender people (LGBT) now stands at £176,695, according to a survey by insurer Compass. 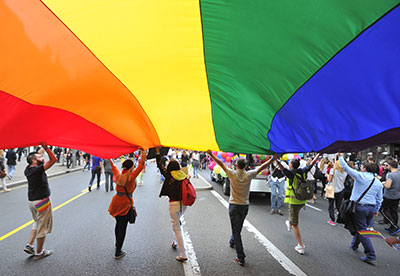 The firm specialises in mortgage and insurance services for the LGBT community and people who are HIV positive.

Chris Morgan, lead financial adviser at Compass, explained there was no difference in the product regardless of customers' sexuality, but he pointed out that those in the LGBT community experienced difficulties in obtaining the right cover due to insurers' application processes such as compulsory HIV tests.

The findings of the LGBT Insurance Survey 2016 are based on more than 100 policies taken out by the firm's lesbians, gay men, bisexuals and transgender clients. Last year the average sum assured stood at £185,015.

Morgan said the amount had decreased because the current survey took into account those with HIV, a market which he described as "established".

Morgan said: "The reason for this [reduction] is the  inclusion in the survey of LGBT people living with HIV, with the average life assurance taken out within the HIV community being lower at £134,733."

Three quarters (76%) of the policies were taken out in order to protect mortgages, while the remaining 24% were purchased to protect families, partners or children.

Morgan believed that improvements in HIV symptoms would continue to influence the sum assured and insurance would be more accessible for the LGBT market in the next 12 months.

This article appeared in our July 2016 issue of The Actuary.
Click here to view this issue
Filed in
07
Topics
Life insurance