MPs call for better regulation for pensions after BHS collapse

Further regulatory frameworks are needed to ensure sponsoring employers do not "evade" pension responsibilities, MPs said today in a report. 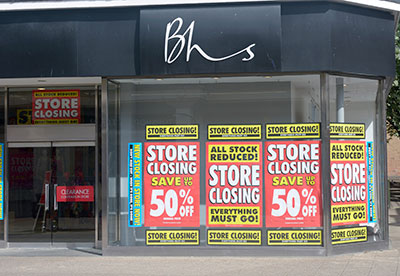 Published by the Work and Pensions Committee and the Business, Innovations and Skills (BIS) Committee, the report concludes the findings from an inquiry into the collapse of BHS.

MPs blamed former BHS owner Philip Green for choosing to "rush through the offloading" of the high street chain to a buyer who was "out of his depth" in terms of retail experience.

The business tycoon sold the company to Retail Acquisitions Ltd (RAL) for £1 in March 2015. The group was led by Dominic Chappell, who had been bankrupt twice in the past.

Iain Wright MP, chair of the BIS Committee, said: "The sale of BHS to a consortium led by a twice-bankrupt chancer with no retail experience should never have gone ahead; and this was obvious at the time.

"The reason it did, however, was Sir Philip Green. He was determined to get the deal done, no matter that the buyer could not deliver what BHS needed."

The department store went into administration in April this year, putting 11,000 jobs at risk. It currently has a pension deficit of £571m, which affects more than 20,000 members.

The report revealed Green had not made enough contributions to the store's pension fund, which comprises of two schemes: staff and senior management.

In an evidence session of the inquiry, Green said he had been not aware of the growing deficit of the scheme and blamed trustees for making "stupid, stupid, idiotic mistakes".

However, MPs rejected any claims that Green was not aware of the issue, adding: "As these schemes declined into substantial and unsustainable deficit he and his directors repeatedly resisted requests from trustees for higher contributions."

Prior to the sale, a recovery plan called Project Thor had been developed but the Pensions Regulator (TPR) expressed concerns over "moral hazard" and made further requests to improve the plan.

Thor was later paused for "a variety of explanations", ranging from Christmas to the Scottish independence referendum and instability in Ukraine, the committees said.

"In fact, the primary reason was Sir Philip Green's resistance to TPR's moral hazard requests. He did not wish to respond to requests for information regarding historic dividends, management charges, sale and leaseback arrangements, inter-company loans and the use of BHS shares or assets as collateral for company purchases."

The committee concluded that Thor was a credible approach to making the company's pension liabilities more manageable.

Frank Field, chair of the Work and Pensions Committee, criticised Green for the disaster.

He said: "While Sir Philip Green signposted blame to every known player, the final responsibility for up to 11,000 job losses and a gigantic pension fund hole is his."

Lesley Titcomb, TPR's chief executive, welcomed the report and said: "We will reflect on the findings of this report and will engage fully with the next phase of the Work and Pensions Committee's enquiries into defined benefit pensions.

"We have already written to the committee setting out our preliminary views on which aspects of the regulatory framework could be improved and we look forward to providing further input later this year."

The Pensions and Lifetime Savings Association also agreed with the findings of the report.

Its director of external affairs Graham Vidler said that over the past decade employers had put "a record amount of money" into defined benefit (DB) schemes but this had made "little impact" on funding levels because of the challenges facing schemes, which are "complex and varied".

"In this case the Committee has reached a clear conclusion that the sponsoring employer was not supportive and says Sir Philip Green 'and his directors repeatedly resisted requests from trustees for higher contributions' to the scheme and concludes that the 'massive deficit is ultimately Sir Philip Green's responsibility'," he said.

"This sends a welcome and strong message about employers' duties to the millions of defined benefit pension scheme members in the UK."