The Worshipful Company of Actuaries Masters musical theme for this year was continued on 9 May with a visit to Wiltons Music Hall in the East End of London. 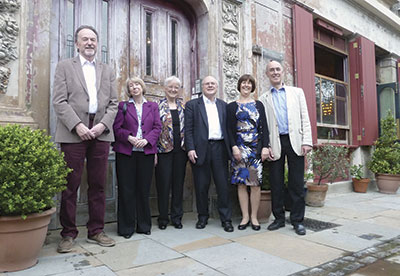 The Worshipful Company of Actuaries' Masters' musical theme for this year was continued on 9 May with a visit to Wilton's Music Hall in the East End of London.
We began with a guided tour of the hall.

Wilton's is the oldest and finest surviving grand music hall in the world. There is an alehouse at the front of the building that was built in the mid-1740s. In the mid-19th century, the licensing laws forbade the sale of alcohol at theatres but sale was allowed where musical entertainment was provided.
Consequently, no new theatres were built at that time and the era of the music hall was ushered in.

John Wilton had the vision to build a music hall behind the alehouse and the other buildings at the front. The building started in 1858 and the hall opened in 1859, just in time for the heyday of the music halls in the 1860s.

The hall, which has now been lovingly restored, is magnificent, but it is difficult to believe that well over 1,000 people could attend a performance. The music hall platform is far higher than a theatre stage, so that you could see the performance even if the person in front of you was wearing a top hat.

Wilton's remained in business until 1881, when it was sold to the Wesleyan Methodists, who renamed it the Mahogany Bar Mission to help the poor of the crime-ridden East End. The Methodists sold the building to the Coppermill Rag Warehouse in 1956, following which the building fell into decay. Wilton's and the surrounding buildings were threatened with demolition but saved by a campaign by John Betjeman. However the extensive renovation has only been possible with the aid of the Heritage Lottery Fund.

Following the enjoyable tour, we adjourned to Leman Street and nearby gastropub the Dispensary, which, by coincidence, was also built in 1858. The Dispensary prides itself on its good fresh food, getting its fish daily from Billingsgate Market and its meat from Smithfield. All enjoyed the three-course supper with wine and some were heard making a booking to eat there in the future.
This article appeared in our July 2016 issue of The Actuary.
Click here to view this issue
Filed in
07
Also filed in
People & Social News