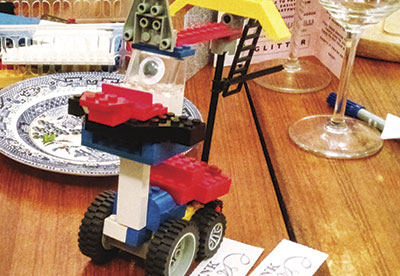 As much as I try to convince my friends that my official title is 'statistician of danger, FIA', the truth is, as actuaries, we're often at our desks, forced to forfeit a lot of the fun to other (totally less capable) people. So what better way to let our hair down than to let ourselves loose over a box of Lego? It could only go well, right?

On 19 May, SIAS had its first Lego Robot War, hosted by Drink Shop & Do on Caledonian Road, London. Judging by the success the evening was, I can only hope there will be many more to come.

The evening started off with arrivals relaxing and helping themselves to snacks and drinks. Then came the boxes of Lego. Teams of about four members each were given roughly 30 minutes to build a robot and come up with a name and backstory for their creation.

Credit goes to participants for their boundless creativity. Some of the highlights include a robot named 'The Bi-Plane' with an affinity for world peace and the special ability to 'go both ways', and a mind-reading robot called 'Chompy Googly Eyes' (pictured above).

There could only be one winner, though, and the top prize, of cocktails on the house, went to one of the Legal & General groups for their robot, 'Doris'. The design of Doris' was rather reminiscent of the castle in the movie Howl's Moving Castle, and her special abilities were a great Sunday roast, knitting jumpers, and death by rotating pitchfork. One of those things is not like the others.

The evening came to an end all too soon, and the robots had to be returned to the scrapheap, where they will remain until they are called to do battle once again.
This article appeared in our July 2016 issue of The Actuary.
Click here to view this issue
Filed in
07
Also filed in
People & Social News