Production losses caused by climate change in one part of the world can be felt in another due to globalisation, a study has revealed. 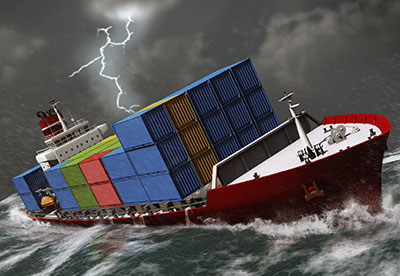 Researchers at the Potsdam Institute for Climate Impact Research and Columbia University explained this was because increased connectivity through supply chains could "amplify production losses", as these can be spread more easily across countries.

The study, published in the journal Science Advances, examined data on temperature, population and the global economic network from 1991-2011 across 26 sectors in 186 countries.

The researchers noted that production losses had increased between that period, but the trend was not so pronounced in the 1990s and only became more apparent from 2001.

"Since 2001, the economic connectivity has augmented in such a way as to facilitate the cascading of production loss," said the authors of the paper.

Lead author Leonie Wenz said: "Our study shows that since the beginning of the 21st century the structure of our economic system has changed in a way that production losses in one place can more easily cause further losses elsewhere."

The Potsdam Institute added Typhoon Haiyan, which took place in the Philippines in 2013, destroyed more than half the world's production of coconut oil.

The product "is one of the two most commonly used vegetable fats in food production worldwide", it said.

Another example was a series of floods in Queensland in 2011, which stopped production in the world's fourth biggest coal exploration site for weeks, "with economic repercussions well beyond Australia".

Co-author Anders Levermann said: "To estimate the costs of future climate change we need to assess global economic impacts of more frequent heat extremes and meteorological impacts, such as floods and tropical storms, and understand their relation to the economic network's structure.

"This is the basis for implementing appropriate adaptation measures - in a warming world with more intense weather extremes it is likely that society needs to become more resilient and more flexible."

This article appeared in our June 2016 issue of The Actuary.
Click here to view this issue
Filed in
06
Topics
Environment