AXA France had received an estimated 5,200 claims for damages caused by recent storms and heavy rains in France as of 5 June. 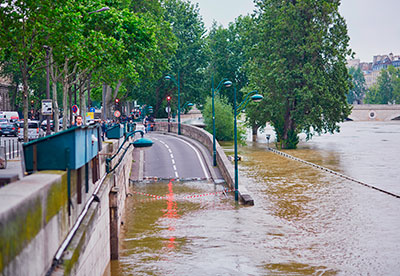 The French insurer told The Actuary its staff were actively helping affected customers. A spokeswoman said: "As you can guess, we have many people working on the case, who are mobilised to support and accompany our clients."

AXA France said that "given this exceptional context" it would extend deadlines for claims declarations until 30 June.

For those with household insurance and who are unable to live in their homes, the firm will increase the period of emergency accommodation from seven to 15 days.

In addition, it will assess cases individually and offer the most affected victims "an advance on their compensation", meaning it will provide them with items such as clothing and food.

Besides France, Southern and Central Germany were also affected by the floods. German insurer Allianz is still receiving claims notifications, but expects to provide an estimated amount when the company publishes its second quarter financial results in August.

The firm said its agents were helping customers around the clock to report their claims.

A spokeswoman told The Actuary: "Our experts are currently assessing damage to buildings and home contents in the areas that have been hit the hardest.

"These experts estimate the damage incurred, give customers advice on the next steps to be taken, and can make advance payments right away where appropriate."

The firm has set up a toll-free hotline in order to record claims and discuss initial measures to be taken. In addition, it published a guideline about what to do in the aftermath of the floods.

Allianz also urged customers to provide a description of the damage, adding: "Photos are also helpful."

This article appeared in our June 2016 issue of The Actuary.
Click here to view this issue
Filed in:
06
Topics:
Environment