Recent thunderstorms and floods in Southern and Central Germany have revealed the average flood insurance take-up rate for residential buildings across the country is estimated at around 38%, according to AIR Worldwide. 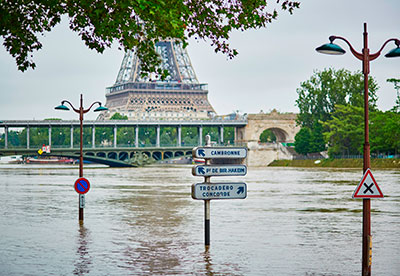 However, the catastrophe modeling firm explained there was "significant regional differences in insurance".

"There is no nationwide compulsory insurance coverage for floods, and it is typically excluded from standard residential, commercial, and industrial policies," said the firm.

AIR Worldwide did not have any loss estimates, but expected much of the loss from the disaster to occur outside the floodplain. It said: "Smaller claims from off-floodplain losses can add up to a significant portion of total insured losses."

Local communities experienced major riverine and flash flooding over the weekend following several days of heavy rainstorms, which also affected other regions such as parts of France.

Hail up to 5cm in diameter was reported in southern Bavaria, and a 10cm hail layer accumulated. AIR Worldwide said 33 people were injured by a lightning strike at a soccer match.

Meanwhile, in France, Reuters reported damages caused by the floods could cost insurers at least 600m (£471m), according to the French Insurance Association.

Famous landmarks in Paris such as Musée du Louvre and Musée d'Orsay are closed until at least 7 June due to the level of River Seine.

Bernhard Reinhardt, senior client services associate at AIR Worldwide, said: "Most damage was reported from communities along the Seine which peaked in the night between Friday and Saturday. The Seine exceeded levels expected to occur only every 30 years on average in Paris."

French Prime Minister Manuel Valls said the Seine had stabilised after reaching a peak on the weekend.

Data from the French Ministry of Environment, Energy and the Sea revealed yesterday that flood levels in Paris was of 5.62m at 17:00, a decrease of nearly 50cm from the flood peak.

This article appeared in our June 2016 issue of The Actuary.
Click here to view this issue
Filed in:
06
Topics:
Environment