This was the event that drew in an audience of over 90 delegates on 13 April at Staple Inn Hall, London. Chaired by Michael Tripp and organised by the Resource and Environment Board, the event saw pension consultants, trustees, investment managers, insurers, regulators and environmental non-governmental organisations (NGOs) in attendance. 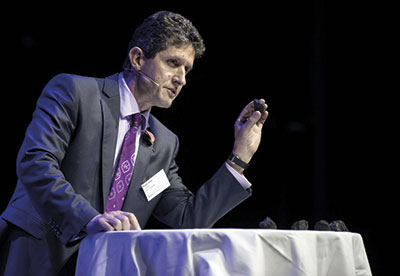 This was the event that drew in an audience of over 90 delegates on 13 April at Staple Inn Hall, London. Chaired by Michael Tripp and organised by the Resource and Environment Board, the event saw pension consultants, trustees, investment managers, insurers, regulators and environmental non-governmental organisations (NGOs) in attendance.

Mark Carney had set the scene in his speech last September, where he broadly divided climate change impacts between:
The focus of this event was liability risks and Professor Myles Allen (pictured above) from the University of Oxford opened proceedings by describing the relatively new science of climate attribution. This aims to quantify the probability that any particular weather event was caused or worsened by greenhouse gas emissions. For example, "it is likely (90% confidence) that past human influence on climate was responsible for at least half the risk of the 2003 European summer heat-wave".

The models and the mathematics to justify such statements are complex.

Using such evidence, the legal basis for claims was taken up by Richard Lord QC. He outlined the formidable difficulties faced by claimants in proving, on the "balance of probabilities", that a particular polluter should be held responsible for any particular damage, when greenhouse gas emissions are a global phenomenon. However, these difficulties are not insurmountable, and some courts are willing to entertain such arguments.

A commercial view was then given by Chris Warrior, an underwriter with Hiscox in the Lloyd's insurance market. His expertise is in insurance for directors of businesses, and he said that liability risks have yet to make a significant impact.
However, he noted the potential exposure of directors, given their responsibility to ensure that material risks are properly recognised and disclosed.

He mentioned the recent investigation launched by the New York attorney general as to whether ExxonMobil had misled investors, and the potential for huge fines in such cases if sustained.

The final speaker was Alice Garton, a lawyer from ClientEarth, an NGO using the law to protect the environment. She also drew attention to the obligations of directors to approach climate change as a risk management issue and to make proper disclosure. She noted that the first successful cases against the tobacco industry were won because they had deliberately suppressed their own evidence and misled the public. Climate-related disclosure requirements are likely to increase, and she mentioned the current Financial Stability Board taskforce developing voluntary global standards. With regard to trustees, where both investments and sponsors may be exposed to climate risks, a risk management approach was again advocated.

She noted that there are various potential litigants, ranging from scheme members to litigation funders (a novel form of alternative investment), not forgetting regulators.

To sign up to the Resource and Environment newsletter for all the latest developments, log into your member area at www.actuaries.org.uk and select the 'contact preferences'.
This article appeared in our June 2016 issue of The Actuary.
Click here to view this issue
Filed in
06