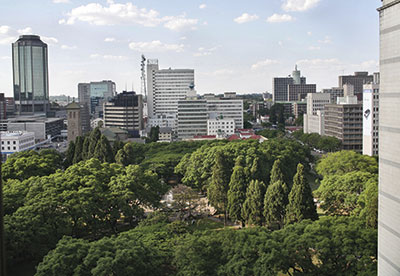 The Actuarial Society of Zimbabwe (ASZ) has had a number of interesting events since our last update in The Actuary (August 2015).

We congratulate and wish Shepherd Fungura all the best after assuming presidency from David Mureriwa in March 2016. We would like to thank David for his tireless efforts and immense contributions in leading the ASZ and his services to the profession during his term. Membership and awareness of our profession in Zimbabwe have grown significantly under his leadership.

The ASZ also hosted Douglas Hoto and Kelvin Chamunorwa, who gave presentations to members towards the end of 2015.

Douglas, an experienced business leader who is the CEO of a Zimbabwean insurance group, presented on 'entrepreneurship and being an actuary'. Kelvin, a former editor of The Actuary, gave a presentation entitled 'adapt or die'. Both talks were well attended and very insightful, and can be found on the ASZ YouTube Channel.

We are currently preparing for the 2016 Actuarial Convention, which will be held on Friday 10 June at the Meikles Hotel in Harare. The theme for the convention is 'innovation and relevance'. For further information on participating in, or assisting the ASZ, please contact our secretary Tawanda Chituku on [email protected]
This article appeared in our June 2016 issue of The Actuary.
Click here to view this issue
Filed in:
06
Also filed in:
People & Social News