Floods caused by a series of storms last winter have generated more than 15,000 insurance claims for homes and businesses, the Association of British Insurers (ABI) has said. 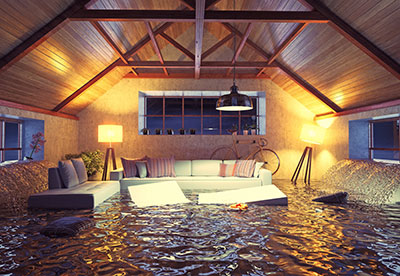 The average cost of each domestic claim for the floods caused by storms Desmond, Eva and Frank is around £50,000.

The ABI described the figure as "higher than usual", reflecting the extensive damage caused by the disasters.

Of the 15,000 claims, 85% have been either fully or partly paid out so far. The professional body said there could be several reasons why payments had not been made.

For instance, a contractor carrying out work may not have yet billed the insurer, or the policyholder may be choosing to plan other improvement works on top of the repairs.

"Insurers will look to make interim payments where necessary and provided £80m in emergency payments in the immediate aftermath of the floods, to both homes and businesses," said the ABI.

Firms are spending nearly £27.5m on alternative accommodation for affected families while their properties are repaired, according to the ABI. The final bill for all repairs is expected to reach £1.3bn.

Mark Shepherd, manager of general insurance policy at the ABI, said: "Repairing a flooded building cannot be rushed because of the importance of making sure it is properly dried out before repairs are done.

"The work needed to fully restore every single property affected in December continues with the same sense of urgency as in the immediate aftermath."

To provide affordable cover to high-flood-risk households, insurers, along with the UK government, have created reinsurance scheme Flood Re. It is funded by a levy on the industry.

In March, chancellor George Osborne announced in his latest budget statement the standard rate of insurance premium tax would go up by 0.5% to 10% from 1 October to fund investment in flood defences.

This article appeared in our May 2016 issue of The Actuary.
Click here to view this issue
Filed in:
05
Topics:
Reinsurance