United Nations (UN) secretary general Ban Ki-moon has called on the insurance industry to lead by example to reduce climate risk and ensure a more sustainable world for all. 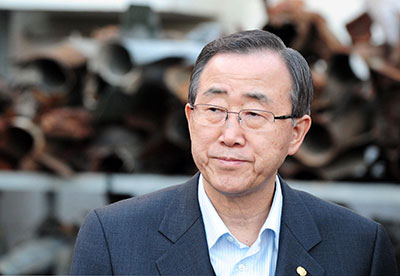 Speaking at a meeting at the UN headquarters in New York, Ban stated: "Climate change profoundly affects your core business in two important ways. First, you will be faced with mounting claims of a magnitude not yet seen. Second, your investment decisions could give rise to unexpected risks."

Among other measures insurers should take, Ban urged them to 'green' their investment portfolios and, by 2020, to measure their carbon footprint.

"It is not enough to simply create new products to respond to climate catastrophes," he argued.

"You must also decarbonise your investments so they do not contribute to rising greenhouse emissions. At some $25tr, you own some of the world's largest investment portfolios."

The UN secretary-general also challenged the industry to double its investments in "clean, sustainable" energy by 2020.

With the world population reaching eight billion people, Ban said clean energy was "one of the world's biggest market opportunities".

He added: "Investment in clean energy is growing rapidly. Renewable energy sources are becoming rapidly cheaper and more available to larger segments of the global population.

"But they still compete against trillions of dollars invested in the fossil fuel industry. Your investments can significantly alter this equation."

Additionally, Ban asked the industry to work with the UN to help the most vulnerable countries.

"Economic losses from natural disasters are now estimated to exceed $300bn a year. This century, more than one million people have already lost their lives to disasters. We need to move from managing disasters to managing and reducing risks," he said.

"The poorest and most vulnerable people - those who have done least to cause climate change - need support to reduce their exposure to climate impacts."

Ban also challenged insurers to develop auditable standards in the industry that incorporate the Sustainable Development Goals - a set of 17 goals created by the UN with the aim to "end poverty, protect the planet and ensure prosperity for all".