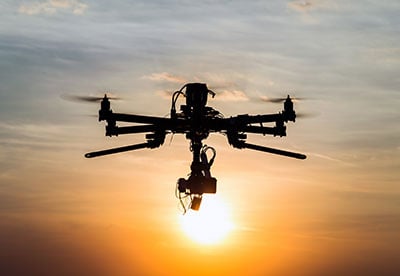 Laurence Baxter, head of policy and research at the CII, noted a "growing number" of drones, also known as unmanned aerial vehicles (UAVs), in use.

"Unfortunately there has been relatively little progress in thinking about better safeguards, despite the fact that they could pose a threat to not just jet airliners but smaller aircraft and helicopters," he said.

The professional body highlighted the need to explore better detection technology such as transponders, which would allow UAVs to be spotted and tracked by air traffic control and airliner collision avoidance systems.

The CII also called for detailed testing to determine the risk of drones to other airspace users.

Geofencing to prevent UAVs from entering certain airspaces was also considered 'feasible', but Baxter added: "As it stands there are gaps in making this work to benefit all airspace users."

Registration was another suggestion, which involves owners entering their details on a database before they could fly a drone, and ensuring it is equipped with transponders and geofencing. He said ministers were currently considering an online registration system to impose owners to do so.

"They might help sensible owners understand the dangers posed by drones, but it may not help when owners wish to deliberately fly their drones near other aircraft," Baxter added.

His comments follow an incident on Sunday when a British Airways pilot reported an object, believed to be a drone, had struck the front of the aircraft. The flight landed at Heathrow Airport safely and no damage or injury occurred.

However, Baxter said the collision highlighted the need to address the issue and how to prevent future collisions that might be "far more serious".

"Many experts consider it can only be a matter of time before a major accident occurs," he warned.