Insured losses from natural catastrophes and man-made disasters worldwide were $37bn (£26bn) in 2015, according to a study by Swiss Re. 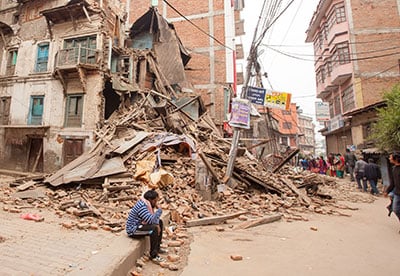 However, the reinsurer warned the amount only covered about 40% of the total global economic losses, worth $92bn (£64bn).

Of the $37bn insurers' payout, $28bn (£20bn) were attributed to natural catastrophes. Overall there were 353 events last year, 198 of which were natural disasters.

Swiss Re said Asia suffered most losses, with the economy losing nearly $38bn from all events across the continent.

The biggest insured loss of the year was caused by two large explosions at the Port of Tianjin in China in August, with an estimated property loss of between $2.5bn (£1.7bn) and $3.5bn (£2.4bn). The explosions formed the biggest man-made loss event ever in Asia.

The biggest disaster of the year was the Nepal earthquake in April, which killed nearly 9,000 people. The reinsurer said it was the largest loss of life in a single event. Economic losses were estimated at $6bn (£4.2bn), which includes damage reported in India, China and Bangladesh.

In a separate report, Impact Forecasting, Aon Benfield's catastrophe model development team, said due to the region’s low insurance penetration, only a fraction of damages were protected.

Swiss Re's chief economist Kurt Karl said: "The earthquake in Nepal struck close to the capital, Kathmandu, causing widespread devastation and losses, which were mostly uninsured. Yet again, tragedy has hit an area where people are least able to protect themselves."

Another event causing high losses in Asia was Typhoon Goni in August, which affected countries including Japan, the Philippines and North Korea. Insurers paid out $1.2bn (£840m).

This article appeared in our April 2016 issue of The Actuary.
Click here to view this issue
Filed in:
04
Topics:
Environment