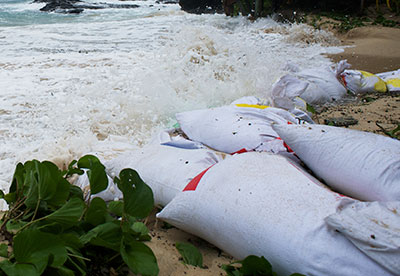 The firm's report Global Catastrophe Recap, which evaluates the impact of the natural disaster events that took place in February, said the figure equalled around 10% of the region's GDP.

The cyclone, which hit the archipelago's largest and most populated island Viti Levu, killed at least 44 people and damaged more than 24,000 homes. Insurers were expected to pay out $47m (£33m).

The report said another notable event was a 6.4 magnitude earthquake, which hit southern Taiwan on 6 February, killing at least 117 people and injuring 550 others.

The reinsurer said the damage was "most significant" in the city of Tainan, where several multi-story buildings collapsed. Most of the fatalities occurred at a fallen 17-story residential complex.

The Taiwan government allocated $750m (£524m) for recovery and reconstruction. However, preliminary insured losses were estimated at only $8m.

Steve Bowen, associate director and meteorologist at Impact Forecasting, stressed the importance of increasing insurance penetration in regions where the market is not mature.

"These events pose a risk of further straining government disaster-recovery budgets. This will only reinforce the importance of insurance and risk analysis, particularly in countries with lower insurance penetration levels," he said.

Meanwhile, in the US, severe storms caused straight-line winds and heavy hail across the country. Economic losses were expected to be $1bn (£699m).

In Europe, storms Henry and Imogen affected parts of Ireland and the UK with high winds and coastal flooding. Total combined economic losses from both storms were estimated at $175m (£122m).

Bowen said El Niño was responsible for many global natural disasters in February.

He added: "From Tropical Cyclone Winston's record intensity landfall in Fiji to flooding rains in California to the worst drought in decades across parts of Southeast Asia and Africa, it is clear that the El Niño phenomenon will continue to impact atmospheric and oceanic patterns in the months ahead."

This article appeared in our March 2016 issue of The Actuary.
Click here to view this issue
Filed in
03
Topics
Environment