SIAS held its 2015 Annual Dinner, themed A night at the awards, at the Roundhouse in Camden on 20 November. 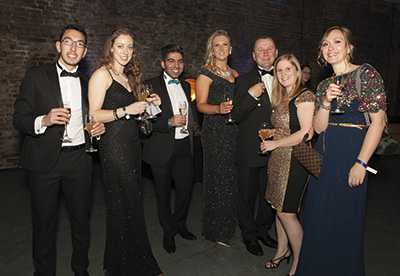 SIAS held its 2015 Annual Dinner, themed 'A night at the awards', at the Roundhouse in Camden on 20 November. Guests were treated to a red carpet entrance along with our very own paparazzi. They indulged in a Champagne reception on the circle balcony, giving impressive views of the grand venue.

Around 700 guests were then seated for a three-course dinner, followed by plenty of dancing. A selfie stick was given to each table to keep guests entertained. Pictures that were Instagrammed using #SIASSelfie2015 were shown on a big screen at the venue, giving guests the chance to feel like real celebrities.

A charity raffle was drawn on the night and the prestigious SIAS 'awards' were given out to the winners - some of whom were brave enough to give an acceptance speech. Those who were still standing joined us for the after-party at Gilgamesh.
SIAS would like to thank all attendees who embraced the theme and in doing so made it such a fantastic and memorable night.

The social team are already working hard to bring you an even better 2016 Annual Dinner.

For details of 2016 events, go to sias.org.uk.
This article appeared in our March 2016 issue of The Actuary.
Click here to view this issue
Filed in
03
Also filed in
People & Social News