Firms expect the value of general insurance claims to go up following the floods during December and January. 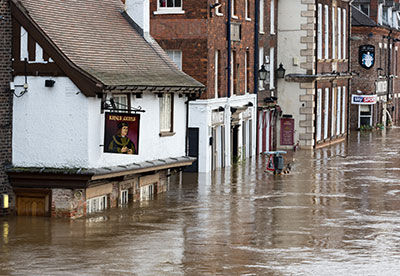 PwC estimated the floods caused by storms Desmond, Eva and Frank would cost the sector up to £1.4bn.

According to its latest quarterly Financial Services Survey, produced in conjunction with the CBI, business volumes in the sector 'rebounded' after falling in the previous quarter. However, volumes were set to drop again in the next three months.

Profits rose "at a stronger pace" but growth was expected to slow below its long-run average in the quarter to March.

Based on a poll of 100 firms across financial services, the survey said general insurers were beginning to focus less on improving the efficiency of their systems, and were now concentrating on expanding capacity and winning new customers.

It added that they had continued to invest in technology and staff, with "significant growth" in employee numbers.

Jonathan Howe, UK insurance leader at PwC, said: "It seems that general insurers are now starting to invest in new systems to enable them to cross-sell to existing customers and attract new customers."

Life firms also reported growth in profit and business volumes, and were also planning to invest more in IT. They cited reaching new customers as their main reason for capital expenditure in the year ahead.

For brokers, business volumes and profitability grew in the three months to December and this trend is expected to continue in the next quarter.

However, PwC said they continued to face pressure as a result on focusing on improving margins and efficiency, and were planning to increase investment in IT in the year ahead, following recent M&A activity in the sector.

Colin Graham, insurance partner at PwC, said: "Those who invest now in improving the efficiency of their systems will find themselves in a strong position over the next few years as competition remains intense.

"Brokers are finding competition tough in the sector following the wave of M&A, and investing in long-term brand identity and reputation is a priority for insurance brokers."