Insured losses for storms Desmond and Eva could reach £1.2bn

Recent floods in several parts of England, Scotland and Northern Ireland in December due to Storms Desmond and Eva could cost insurers between £900 and £1.2bn, according to PwC. 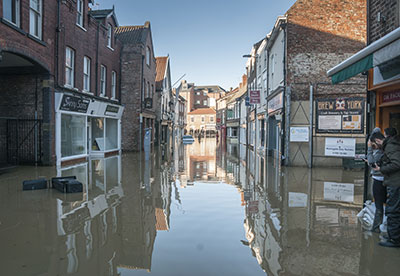 However, Mohammad Khan, the firm's general insurance leader, said the projections did not include any government spend on flood defences, which is estimated between £2.3bn and £2.8bn.

He added the two events had caused at least 11,500 house floods, and the more recent Storm Frank had affected 16,500 homes and business.

"Given that Storm Frank is ongoing it is far too early to tell what the full impact will be," Khan said.

"However, 16,500 homes and businesses have already been left without power by Storm Frank in the Republic of Ireland, Northern Ireland and the North of Scotland, and the total economic loss caused by the three storms may well breach £3bn."

The Association of British Insurers (ABI) said that so far insurers had made emergency payments of £2.6m. Of these, £1.7m was paid for domestic customers and £900,000 for businesses. It confirmed it would be making further estimates to include Storm Frank.

Meanwhile, Prime Minister David Cameron has announced more than £40m will be spent to rebuild and improve flood defences in the aftermath of Storm Eva.

The ABI reminded homeowners and businesses about the availability of grants to fund resilience and resistance measures, and outlined a range of techniques to keep water out of buildings, reduce damage, and make future repairs more quickly and easily.

James Dalton, director of general insurance policy at the ABI, said: "There is an important opportunity here for people to think about whether there are things that could be done to reduce the damage if they are unfortunate enough to be flooded again and government funding is available to assist.

"There's an increasing range of measures available to choose from that could make a difference."